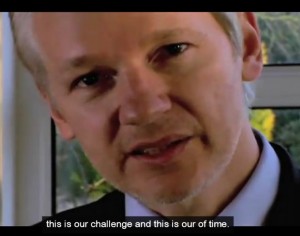 At 5:40pm on Friday, Australian time, the BMW Edge at Melbourne’s Federation Square was full. The glass conference room, with a capacity of 700, lies in the heart of the city; geographically as well as culturally. The e-mail I received warned that seats to this free event would go fast. Right on time, twenty minutes after standing room ran out, the event got underway. An overflow crowd of 600 watched on the big screen in the outdoors square. The event was titled, “Wikileaks and free speech.”

There was some serious backing to this event including Liberty Victoria, the grassroots organisation Get Up! and Australian Lawyers for Human Rights. They were joined by Future Leaders, a philanthropic initiative, as well as three major representative bodies: The Law Institute Victoria, the recognised professional association for solicitors, The Media Entertainment and Arts Alliance, the peak union and professional organisation for the media, entertainment, sports and arts industries, and Victorian Trades Hall Council, the peak trade union body in Victoria.

Outside of Israel, such diverse cooperation in the name of democratic principles is rare. This diverse mobilisation of civil society, along with strong public support for Wikileaks, explains how the crowd of 1,100 people was gathered with just 4 days notice. Twitter, Facebook and “old fashioned” e-mail no doubt all played their part.

The opening remarks from Prof. Spencer Zifcak, President of Liberty Victoria, included a tongue-in-cheek welcome to members of the Australian intelligence services who might be in the audience. Mr Assange himself participated through an exclusive, pre-recorded, video address to the gathering.

In his message Mr Assange referred to the basic human decency Australians have shown in their support for each other during the recent floods, and thanked Australians for their support of Wikileaks. He refers to himself as a journalist used to “reporting the news,” later noting his years of membership in the Media Entertainment and Arts Alliance and how his first book was published fourteen years ago. While refusing to become mainstream if that prevented Wikileaks speaking truth to power, he sought to reframe Wikileaks as a media player that had been active long before the current controversy.

Assange declared the current times a “generational challenge”, drawing comparisons with the US civil rights struggles of the 1950s, the peace struggles of the late 1960’s, and recent environmental struggles. “This is our challenge, and this is our time” he declared. He framed the challenge itself as defence of the idea that “the citizenry has a right to scrutinize the state.” He warned that “individuals, not governments, have a right to privacy,” and that “strong powers must be held to account, while the weak must be protected.” In what is likely to become a cliché, he declared “we believe in transparent power, not in transparent people.”

Stating, “we are a media organisation, I am a publisher and I am a journalist,” Assange argued Wikileaks was nothing less than journalism in the public interest. He gave as examples of this leaks he claimed exposed illegal government actions by both the US and Australia. He called on Australians to insist that attacks on his staff and organisation stop, that he be allowed home, and that the Australian government “come clean” on its interactions with foreign governments in relation to Wikileaks. Julian Assange’s address was met with loud applause from the audience.

Jennifer Robinson, Assange’s UK based lawyer, joined the gathering through a skype video link. She argued there was a free speech and democratic public benefit that resulted from Wikileaks, and supported her argument with reference to the Sydney Peace Foundation’s award of a Gold Medal to Assange earlier that week. This was only the fourth times the foundation had awarded a Gold Medal in the last 14 years. Two of the other receipts were Nelson Mandela and the Dalai Lama.

Christopher Warren, Federal Secretary of the Media, Entertainment & Arts Alliance, framed Wikileak’s difficulties as both a free speech and a freedom of the press issue. He said that information is held by governments on trust for the people, and the people have a right to know. He also told the audience the internet had changed journalism long before Wikileaks. In this new environment, he argued, Wikileaks and journalism generally, was doing no more than it had always done; publishing leaked documents in the public interest. Leaks he argued were as old as journalism itself.

Lizzie O’Shea, a public interest lawyer, drew a comparison with Egypt. She argued that the US attempt to shut down Wikileaks was similar to Egypt’s attempts to shut down the internet itself. She said the hypocrisy of modern statecraft was hard to stomach, and called Wikileaks the Pentagon papers of the twenty first century. She too echoed the cry that defending Wikileaks was defending freedom of the press.

Peter Gordon, a top Melbourne lawyer, argued that Australia’s Prime Minister and Attorney General, both personal friends of his, had departed from their true values when it came to Wikileaks, and needed reminding. Adam Bandt, Australia’s first Green Party member of the House of Representatives, expressed his support and that of his party for Wikileaks, and for online freedom.

Donations to support Julian Assange’s legal costs were solicited at the end. Donations made by card gave an option for residual funds to be returned to the donor or spent on Wikileaks. The flexibility highlighted the broad coalition of support from civil society organisations. The mountain of cash donations, which people gave instead, reflected the public’s unconditional support.

As the event was drawing to a close, the rain came down in a torrent. The Melbourne Art Centre, previously visible across the Yarra river, vanished in a sheet of rain. Out in the square, the Wikileak supporters mingled with those from another cause; a march in support of the Egyptian protestors.

At Federation Square, in the heart of the city, a crowd had gathered, and then dispersed. The rain continued to fall. Roads were closed and emergency services stretched to their limit. On the radio, a caller said a civilian had taken it upon themselves to direct traffic at a busy intersect. He had two complaints, the fist was the equal time being given to the two flows of traffic being controlled, the second that “they’re not even wearing a hi-vis vest!” Australia has much in common with Israel; a public concern for the welfare of strangers, the willingness to lend a hand in a crisis, and a respect for those who get stuck in and do things. Australian culture also demands that a “fair go” be given, and harbours a healthy disrespect for authority. For a diverse range of Australians, Wikileaks ticks all the right boxes.

This entry was posted in In the media, My Op-Eds and tagged assange, Jerusalem Post, oboler, wikileaks. Bookmark the permalink.