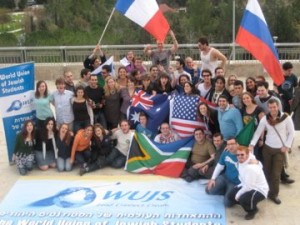 I assisted the World Union of Jewish Students (WUJS) with their 2009 congress, “WUJS 3G”. The Congress, based in Jerusalem, was themes on emerging technology.

I moderated the track online antisemitism which included a presentation from myself as well as presentations from Amos Hermon (head of the Jewish Agency’s task force to combat antisemitism), Aryeh Green (an advisor to Natan Sharansky for over an decade), and Adam Levick (a staff member at the ADL until he made Aliyah in late 2009). The track was followed by a working group I ran in which students planned an online campaign.

Another session I organised included Sgt. Aliza Landes (who heads the new social media desk for IDF), David Appletree (founder of the JIDF) and Alex Margolin (a social media expert at Honest Reporting).