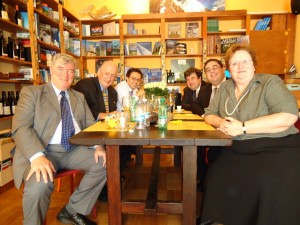 I met with Australia’s Ambassador to the Vatican, and former Deputy Prime Minister, Tim Fischer in Vatican city.The presentation to Amb. Fischer was a preview of that  presented to the Italian Parliament the next day.

The discussion covered issues of online antisemitism, the specific nature and danger of antisemitism 2.0. We also discussed the recommendations of the Working Group into Online Antisemitism of the Global Forum to Combat Antisemitism.

After the formal meeting the discussion continued over lunch with Ambassador Fischer and Australia’s Ambassador to Italy, Amanda Vanstone as well as Embassy staff and the Lithuanian Ambassador. With both Australian Ambassadors being former cabinet ministers, the conversation quickly turned to the general difficulties of striking the right balance in any legislative scheme.