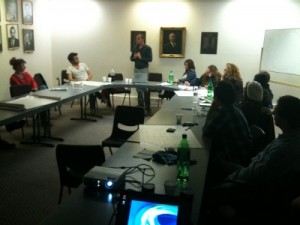 In October I organized a social media workshop which was run (in slightly different formats) in Sydney and Melbourne.

Details on the presenters:

A professional advocacy trainer who runs the Jerusalem Center for Communication and Advocacy Training. He is an international speaker, advocate and educator. He is spending a few days in Melbourne as part of an Australian tour. David lives in Israel.

An Israeli composer for film and television. He is based in the US and recently produced two powerful YouTube advocacy videos, one on the flotilla and the other combating the BDS movement. He is visiting Australia for one week only. See IMDB.

A producer and director for film and television. She has been a co-producer of Australian Idol and recently returned from America where she was working on Mad Men. Danielle is based in Sydney. See IMDB.

Director of the Community Internet Engagement project. He is a social media researcher and commentator. His analysis on YouTube, Facebook, and other social media platforms has appeared in The Guardian (UK), F.A.Z. (Germany), RAI News 24 (Italy), The Jerusalem Post (Israel), and other publications.