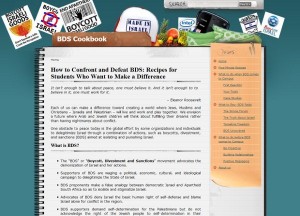 The BDS Cookbook provides resources and plans of action to students wanting to combat the Boycott, Divestment and Sanctions movement.

The site is a collaboration by a group of academics and students concerned about the misrepresentations made by the BDS movement. The technical work behind the site was provided by myself and my team at the Community Internet Engagement Project.

The BDS Cookbook has become a key resource in the fight against BDS. It has received press coverage in a number of newspapers and major blogs (including the Jerusalem Post, The JTA,  and The Jewish Journal).

In total 182 university networks  and 37 college networks have accessed the
stopbds.com website showing very penetration into the target market.

Other visitors include the Palestinian news network, the US House of Representatives, US Senate and the Executive Office of the President of the US, the Canadian House of Commons, the European Commission, the International Association of Chiefs of Police, The Onion,  the Australian Broadcasting Commission, Fox News Channel, SBS Worldwide, and The Economist.