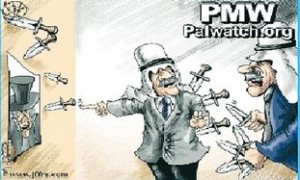 On Sunday, YouTube acted to close a channel on their service run by Palestinian Media Watch. The explanation YouTube gave related to a video from 2006, originally taken from Hamas’s website, which shows a suicide terrorist says his goodbyes and boasting he will soon drink the blood of Jews.

After this video had been on the YouTube at this address since July, suddenly this exposure of terrorism and hate was a “violation of terms” and was promoting hate speech rather than exposing it. Instead of removing the video, as they had done before (without allowing an avenue for appeal or discussion), YouTube removed the entire channel. This seems to be based on a policy of banning accounts after 5 strikes against the Terms of Use. The mistakes, on YouTube’s part, build up until the account is disabled.

A day later, after coverage by myself in Jerusalem Post, and by Melanie Phillips in the Spectator, as well as an increasing volume of outrage on blogs and via Twitter, the PMW channel was reinstated, but the viewing counts seem conspicuously low.

The most viewed video was only up to 13,363 views. This was particularly odd when there are Palestinian Media Watch videos like “Gaza flotilla participants invoked killing of Jews” with over 200,000 views. It seems searching for “by palwatch” (no quotes) gives far better results than viewing the channel. In short the channel is now broken as a result of YouTube’s intervention.

The good news is that of the six complaints again Palestinian Media Watch, four of them have now been reversed. You can now, once again, see “Hamas suicide terrorist farewell video: Palestinians drink the blood of Jews,” “PA cleric: Kill Jews, Allah will make Muslims masters over Jews,” and “Hamas suicide farewell video: Jews monkeys and pigs; Maidens reward for killing Jews.”

YouTube still needs to fix the indexing problem, and review their earlier mistakes. It seems only the most recent complaints have been reviewed and found to be invalid. The good news is that it seems this is a systematic flaw in Google’s system, not something they intended to do. But the problem is occurring with other pro-Israel accounts.

It seems someone, or some group of new media anti-Israel activists, are gaming the system. They are taking advantage of YouTube’s automated and semi-automated systems to push their agenda slowly through the system. First one complaint, then a second… until eventually the goal is achieved and the channel itself is shut down. Until YouTube can improve the system, and recognise when people are trying to “trick” the system into doing what they want, rather than what it is intended to do, we all have a serious problem. This isn’t helped when YouTube’s manual override is broken and leaves those who have been targeted in a worse position then they were to start with.

For now, YouTube need to find the accounts that are causing these problems and deactivate them. This problem is far greater than Palestinian Media Watch, though the damage done to them must be fixed, and an apology wouldn’t hurt either.

Dr Andre Oboler is the Director of the Community Internet Engagement Project at the Zionist Federation of Australia. He is global expert in social media and internet based antisemitism. HonestReporting asked him to bring our readers up to speed on the developing YouTube / PMW revelations.