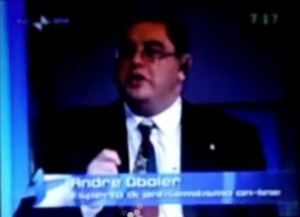 Italy’s Channel One TV station, the most popular TV station in Italy, ran a segment on online antisemitism. The host was Stefano Ziantoni and the studio guests were myself, Fiamma Nirenstein (Vice-President of the Italian Parliament’s Foreign Affairs Committee) , Stefano Gatti (from the Italian NGO who monitor antisemitism).

The segment lasting, 20 minutes and following a review of the day’s newspaper headlines, looked at the sort of antisemitism found on the internet and urgent need to respond. At the hosts invitation, I explained the nature of antisemitism 2.0 and the way it creates and clime of acceptability for antisemitism and hate.

Asked whether Italy was an antisemitic country, Stefano explained the environment was ripe for antisemitism to flourish, particularly due to the ease with which it is spread online. He highlighted that only a few years ago it was relatively hard to find anti-Semitic material. The material existed, but it was in book form and only a few places would sell such books. Now anyone can download this material.

Fiamma echoed the point and spoke particularly about new antisemitism, where the Jewish collective, the State of Israel is targeted and double standards are applied or old fashioned antisemitism that used to target Jewish communities is instead focused on the State of Israel. She referred to the blood libel as a historic form of antisemitism, and the re-emergence of it in the past year through the totally baseless accusation that the Israeli army was killing Palestinians to harvest their organs. Though best known as the Swedish blood libel, it was also promoted online in Italian.

In conclusion I highlighted the need for a community grass roots response as the best possible response to antisemitism, but went on to say that companies should also have ethical values when it comes to these issues. Repeated the message given to the Italian Parliament, namely that if the companies do not self regulate to stamp out hate, then governments must examine the problem and see what measures they can introduce.