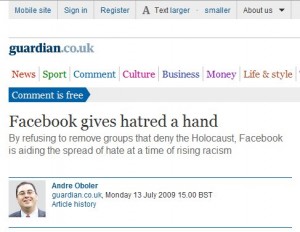 By refusing to remove groups that deny the Holocaust, Facebook is aiding the spread of hate at a time of rising racism

Facebook has decided not to remove groups that deny the Holocaust. This policy contradicts its own “statement of rights and responsibilities“, which clearly states “you will not post content that is hateful”. Facebook seems to be ignorant of the inherent danger of Holocaust denial, the deeply hateful nature of it, and international efforts against racism. It either fails to understand the responsibility it has to society, or it has placed profit far above morality.

Holocaust denial is illegal in 13 countries. Other countries, such as Australia, have broader laws prohibiting racial vilification – the carrying out of a public act that will “offend, insult, humiliate or intimidate another person or group of people” who are targeted because of “race, colour or national or ethnic origin”. In the UK there has long been a debate over strengthening anti-hate laws to close gaps that have been exploited by the likes of the BNP. One gap, for example, makes it an offence to incite hate, but not to be directly hateful to a victim (the case prevented by the Australian laws). The law is, however, a bare minimum. More action against hate is often required, as the National Union of Students has shown with its “no platform policy” – a total boycott of proscribed racist and fascist groups.

As Anthony Julius has explained, combating Holocaust denial “requires the recognition that denial is an especially offensive form of antisemitism” and that “the presence of denial material on the net is treated with as much seriousness as is the presence of other kinds of offensive material”. At the same time as defending its unpopular position to allow Holocaust denial, Facebook has been on a crusade against pictures showing breastfeeding mothers. Either its priorities are scrambled or someone is asleep at the wheel.

Facebook’s allowance of Holocaust denial comes despite a 2007 resolution from the UN general assembly that “urges all member states unreservedly to reject any denial of the Holocaust as a historical event, either in full or in part, or any activities to this end”. It comes despite EU legislation from 2005 that asks countries to pass laws that make Holocaust denial “punishable as a criminal offence”. Facebook’s move comes at a time when the British public are still recovering from the election of the BNP’s Nick Griffin, a Holocaust denier, to represent them in the European parliament. Facebook is a powerful social networking tool – in times like these, with racism across Europe rising, what sort of impact does it have when it helps Holocaust deniers to network and spread their message?

Their only excuse is ignorance. If that’s the case, there is a solution. Today there is a widely accepted definition of antisemitism, produced by the European Union agency for fundamental rights. The definition is used across Europe to identify antisemitic crime. One example it gives is: “Denying the fact, scope, mechanisms (eg gas chambers) or intentionality of the genocide of the Jewish people at the hands of National Socialist Germany and its supporters and accomplices during the second world war (the Holocaust).” If it is good enough for police forces across Europe, and was good enough for the US State Department, who recommended it to Congress, perhaps it will be good enough for Facebook?

The internet requires regulation, just as film, television and computer games do. If companies such as Facebook abdicate that responsibility, it suggests government intervention is needed to prevent an internet-powered surge in racial hatred. The spread of racism and hate is not something that can be left to chance or the whims of the private sector. Working against hate, bullying and racism must be part of the price companies pay when they offer an online social environment as their product. In the meantime, more than 68,000 people have joined the Facebook group “United Against Holocaust Denial On Facebook“. Facebook, get the message and remove the hate!

This entry was posted in In the media, My Op-Eds, Publications and tagged antisemitism, Antisemitism 2.0, CiF, Facebook, Holocaust Denial, the Guardian. Bookmark the permalink.