Andre Oboler’s article, “When an MK’s Palestinian narrative drops for a moment” from the Jerusalem Post 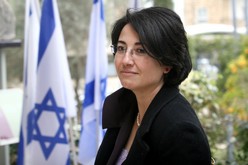 Last week I had the pleasure of hearing a member of the Knesset speak at my university in Australia. The talk was titled “Is Israel a racist country?” The poster introduced MK Haneen Zuabi as the “first woman elected to [the] Israeli Knesset from an Arab party.”

The poster itself raises questions about the issue of racism and indeed sexism in Israeli society. It demonstrated Israel’s democracy and showed how the barriers to participation that exist in other democracies are being challenged and overcome in Israel.

In a small lecture hall packed with 100 students – about half of them Jewish, the other half Palestinian activists – Zuabi began by telling us she was there to give us facts. Facts and statistics, she said, triggering a quick laugh from the political science students there, who know these two words seldom belong together.

THE TALK was, of course, being run by Students for Palestine. I had heard an almost identical opening by an officer of the General Union of Palestinian Students in the UK four years earlier. Hearing such propaganda from GUPS, an organization founded by Yasser Arafat and tied to the PLO, is unsurprising; hearing it from an elected member of the Knesset, an Israeli who claimed (like so many Israelis) to have all the facts, was more than slightly comical.

She told us, as a Palestinian, that she didn’t want a massacre of Jewish Israelis, or to push them into the sea, or to send them “back to Europe.” She stated these ideas were ridiculous (over objections from a local Palestinian activist), then went on to say that Palestinians should not behave like Israelis, and just because, she said, Israelis do these things to Palestinians does not mean Palestinians should do the same. She received a round of applause – was it for charging Israel with genocide (something she would do more explicitly later in the talk) or for claiming the “moral high ground” as a Palestinian?

HALFWAY THROUGH the talk, the Palestinian narrative fell by the wayside. Suddenly she was talking not of Palestinian culture but of Arab culture. She spoke of Israel’s support for Arab culture and her desire for the country to go further – for example, by establishing a university that would operate in Arabic.

She spoke of the stages in Palestinian activism, the rise of collective political will in the 1960s, the start of a collective push for equal rights for Israel’s Arab minority.

She spoke of the current strategy by Israeli Arabs to undermine “the Zionist project” by pushing for Israel to be a country for all its citizens, a country that by her definition could not then have a Jewish character. She told us how she could, as a politician, say what she liked, but then went on to say Israel only allowed this because there was no chance her democratic participation could effect change. Less than a minute later, she boasted about the changes her party, Balad, and her participation were having on Israeli Arab society.

THE TALK provided a fascinating window into the identity crisis faced by Israel’s Arabs. It showed the universal nature of the anti-Israel propaganda, complete with the required accusations of colonialism, apartheid and genocide. And while it ended with the usual call to support boycotts, divestment and sanctions, MK Haneen Zuabi’s talk – propaganda aside – touched on the real debate about the nature of the State of Israel. This is a debate that no doubt goes on in some Israeli coffee shops on a daily basis.

The very fact that she was speaking to us as an MK spoke louder than all her attacks on Israel. She walked out of the room with her head held high, one of 120 parliamentarians representing the diversity of Israeli society.

The writer is a former Legacy Heritage fellow who currently teaches at Monash University in Australia.

This entry was posted in In the media, My Op-Eds, Publications and tagged free speech, Haneen Zuabi, Israel, Jerusalem Post, Politics, racism, Zionism. Bookmark the permalink.