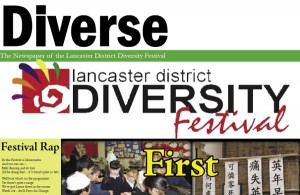 Today, we confront the ugly reality that Anti-Semitism is not just a fact of history, but a current event” – Colin Powell, 2004.

“This is a good time to discuss the issue because Anti-Semitism is on the rise and we must combat it as we do all forms of racism” – James Purnell, House of Commons, 2004.

“Anti-Semitism? What Anti-Semitism?” I hear you ask. Look closer and you’ll see it’s all around us. Rabbi Dr Jonathan Sacks, Chief Rabbi of the Commonwealth said he was “shocked that so few non-Jews in Europe have recognized it and denounced it”. The Anti-Semitism around us today is well-disguised, so well-disguised in fact that it drags even organisations whose sole purpose is anti-racisms into its midst as unwitting allies.

I am speaking not in the abstract, but with knowledge of four local organisations unknowingly ending up in this situation since the start of October. How have we allowed this to happen? How could anyone be so blind? I’ll let the Chief Rabbi explain:
“What we are witnessing today is the second great mutation of Anti-Semitism in modern times, from racial Anti-Semitism to religious anti- Zionism… It uses all the mediaeval myths – the Blood Libel, poisoning of wells, killers of the Lord’s anointed, incarnation of evil – transposed into a new key and context. This could not have succeeded, however, without one mutation – a mutation so ingenious, demonic and evil that it paralyses the immune systems of the West built up over the past half-century. The mutation is this: that the worst crimes of Anti-Semites in the past – racism, ethnic cleansing, attempted genocide, crimes against humanity – are now attributed to Jews and the State of Israel, so that if you are against Nazism, you must ipso facto be utterly opposed to Jews. I regard this as one of the most blasphemous inversions in the history of the world’s oldest hate.”

A recent e-mail circulated on a mailing list at the university encouraged people to attend a talk hosted by a supposedly politically neutral group on campus. The post referred to the “Israeli system of terror” and described a Pro-Palestinian Israeli political campaigner as “proof that not all Israeli’s think that a ‘good Palestinian is a dead Palestinian’”. The group hosting the talk (itself purporting to be involved in Human Rights) ran three anti-Israel talks (including this one) in as many weeks. The group’s obsession with Israel is most concerning.

The official information about this particular group of speakers was of equal concern. It mention one speaker as involved in a “German Campaign against the Apartheid Wall”. To return to Colin Powell, “It is not anti-Semitic to criticize the policies of the state of Israel. But the line is crossed when Israel or its leaders are demonized or vilified, for example by the use of Nazi symbols and racist caricatures.”

The e-mail ends: “note that the organisation [the speakers are from] is not politically active (as a party or anything), but rather as a human rights organisation.” The reality of this situation is that the group that the speakers are from has been so discredited as an NGO they couldn’t even use their name in the publicity of the event, perhaps due to their well known and enthusiastic support of suicide bombers or the view often expressed by them that Israel has no right to exist.

The “International Covenant on Civil and Political Rights” and the “International Covenant on Economic, Social and Cultural Rights” (a key part of the UN Human Rights Commission) have a common first article which states: “All peoples have the rights of self-determination. By virtue of that right they freely determine their political status and freely pursue their economic, social and cultural development.” This right is regularly considered to apply to all peoples except the Jewish people.

In 1975 the United Nations declared Zionism (the Jewish right to self determination and statehood) to be racism. “The United Nations itself is still living with the legacy of the unfortunate resolution… even though the General Assembly revoked it in 1991.” – Kofi Annan, 2004. The director general of the UN may understand the deeply depressing reality of this situation, but some people haven’t caught on. I saw a website of a supposedly respected foreign scholar “Why Zionism Is Racism: Zionism is a racist and irredeemable movement, like Bolshevism, Nazism, and Apartheid.” The article said the revocation was the low point for the United Nations and was brought about by political pressure from Israel. I shan’t spin off into the Anti-Semitism of stereo typing Jewish people or conspiracy theories. They belong to the old form of Anti-Semitism, “protocols of the elders of Zion” style. I hope everyone recognised this familiar form of Anti-Semitism. What is deeply troubling is the inability, even from academics to split one subject from another. Criticism of Israel is legitimate, being Anti-Zionist on the basis that you don’t believe in religion and state being mixed, or in statehood at all, but then singling out Israel and labelling both Israel and Zionism in these terms (as the academic does) is unequivocal Anti-Semitism.

Anti-Semitism is not however just a foreign concept. It is in and around town and on campus. “The Jewish state is evil.” “The Israeli government is evil.” “The people elect the government, therefore the people are evil.” “The claim for a Jewish homeland is itself racist.” “Jews want a Jewish state and support the evil state therefore all Jews are evil.” “We’re involved in human rights and the fight against evil therefore we must proclaim this self evident truth to the word.” “And you call us racist? We’re a human rights group, you run around every where calling our work anti-Semitic, it’s you who are evil!” this skewed logic is unfortunately commonplace, and Lancaster is not free from it.

Can a discussion be had without being anti-Semitic? Certainly. It’s just that it must be done in a fair way. Having a token Israeli or a token Jew present doesn’t absolve the organiser’s responsibility. Especially if the token people themselves are not clear on the dangers of this new form of Anti-Semitism.

A statement by the Joint Presidents of the Council of Christians and Jews (including the Archbishop of Canterbury and the Chief Rabbi) said “We acknowledge that criticism of government policy in Israel, as elsewhere, is a legitimate part of democratic debate. However such criticism should never be inspired by Anti-Semitic attitudes, extend to a denial of Israel’s right to exist or serve as justification for attacks against Jewish people around the world.”

Earlier this year Kofi Annan said, “Criticism of Israeli policies is one thing. But it is quite another when such critiques take the form of attacks, physical or verbal, on Jewish individuals and the symbols of their heritage and faith… No-one should be allowed to use criticism of Israel’s actions as a mask for Anti-Semitism. Nor, on the other side, should Israel’s supporters use the charge of Anti-Semitism to stifle legitimate discussion.”

Unfortunately we see very little legitimate discussion occurring in Lancaster outside of the Jewish community. In Lancaster the environment is uncomfortable with Israel of all the nations in the world singled out for special treatment by numerous groups at the same time. As Lord Janner (leading Labour peer and long-standing human rights activist) put it in 2001, “The singling out of one state is called discrimination; when it is the Jewish state, it is called Anti-Semitism”. Elsewhere in the UK the predicted rise in Anti-Semitism is even more evident.

On the 4th of November a window at a synagogue in Reading, Berkshire was deliberately broken and a lit firecracker dropped inside. There was damage to the floor, a freezer, photocopier and the walls. On the 5th of November a Jewish woman leaving a park in Edgware, Middlesex was verbally abused. A woman said to her, “You fat, ugly Jewish woman, you should have been gassed.” On 7th of November a group of Jews in Leeds on their way to a synagogue were verbally abused when a vehicle doubled back after passing them and a passenger got out and said, “What the f*** are you looking at, you f***ing Jewish bastards”.

I’ll end with the Chief Rabbi, “Anti-Semitism is a crime against humanity – not because Jews are human beings (I hope that much will be conceded) but because human beings are Jews, by which I mean difference is the essence of our humanity… A world that has no room for Jews, has no space for difference; and a world that lacks space for difference has no room for humanity. That is why Anti-Semitism is not a, but the, paradigm of a crime against humanity… Anti-Semitism begins with Jews but never ends with Jews. Now is the time for those who care about humanity to join in the defence of humanity, by protesting this newest mutation of the world’s oldest hate.”

This entry was posted in In the media, My Op-Eds, Publications and tagged antisemitism, diverse, new antisemitism, UK. Bookmark the permalink.