Hasbara on the Internet: Theory, Practice and Strategy 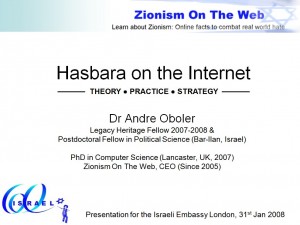 This talk was a keynote speech for an advocacy event run by the Israeli Embassy in London.

The presentation followed an address by Israeli’s Ambassador to the UK. As I was in Israel at the time, the talk and Q&A session was delivered by teleconferencing between the Israeli Ministry of Foreign Affairs in Jerusalem and the Embassy in London.  The technology worked without a problem and I was also able to listen in on the Ambassador’s address.

Problems in Google Earth (the Nakba dots) were discussed, and in particular the implications such replacement geography could have for public understanding of the conflict.

Problems in Flickr were examined, including the link between activists and terrorists.

Facebook was discussed in depth, including problems with the Causes application (which I have since caused to be fixed).

The skills session looked at: