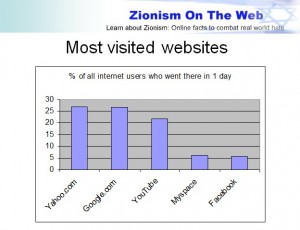 The Global Forum to Combat Antisemitism is the leading international gathering on the topic. The hundreds of invited guests including diplomats, officials from various national governments, academic researchers, experts from NGO and law enforcement.

Highlights of my talk

As a computer scientist I’m going to approach this topic from a different angle. What I’ll present to you here is a snapshot view of the internet, the way people find information, and why this should concern us as people interested in combating the spread of antisemitism and hate more generally.

I’ll also explain what we can do as a community to solve this problem. What I must say up front is that working to remove antisemitic sites is effort intensive and relying on community organizations to themselves do the work to solve the problem is doomed to fail.

Don’t get me wrong, the legal approach, official complaints etc do have a role, but it only addresses a tiny fraction of the problem.

The problem I wish to speak about is the spread of antisemitism. That is, when antisemitic content is spread through the internet to those who may have been looking for something else. It is this pollution of the information superhighway which we should be stopping, in addition to shutting down the industrial polluters. As more internet time is spent on web 2.0 sites, the large polluters cease to be the major delivery mechanism, though they continue as a source of hate.

A quick and somewhat simplistic explanation of web 2.0: A site is web 2.0 if it is built on users generated content, has a community of users, and enables them to share information. A few examples include Facebook, YouTube, Flickr, MySpace, Wikipedia, and the Blogosphere.

Problems with search results gave an initial view of the problem and spread of misinformation and hate. The presentation then focused on the Facebook group “Israeli is not a Country”. I commented, “It has 29,000 members in November, it now has 35,690 members and growing”. This example was also discussed in depth in my antisemitism 2.0 paper which was pre-released at the conference.