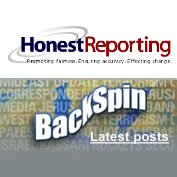 Andre Oboler, the leading authority on anti-Semitism on the Internet, recently called for greater accountability from social media platforms that allow anti-Semitic material to appear on their sites.

Oboler points out that standards of acceptable speech differ between traditional media and the Internet. While blatant anti-Semitism would never be acceptable in the mainstream press, in some parts of the Internet, “to be racist is no worse than to support the wrong soccer team.”

This breakdown in standards, he argues, poses a threat that must be addressed. “If on-line society continues to develop in a moral vacuum, the lack of respect for human dignity may soon be reflected back in the ‘real’ world,” he wrote.

Oboler is right – and not just about hate speech. Any site that gives space to libels and distortions about Israel should also be held to the same account as the mainstream press. As Oboler points out, some of these platforms have unprecedented reach:

YouTube, for example, has a user base 50 times larger than the combined circulation of the top 10 newspapers in America. Can such a powerful medium really exist free of governmental control? With the power these companies wield, is no obligation owed to society?

Government control is one aspect of the solution. Certainly, material that is published on social networks such as Facebook and MySpace or content sharing sites such as Flickr, all of which reach millions or even tens of millions of people, should be subject to the same control as any member of the mainstream media.

But a change must also come from the way the general public relations to social media and the Internet. As long as the public perceives a division between “traditional media” and the “new media,” double standards will prevail. A better designation would be “the New Mainstream Media,” which would refer to the biggest members of both groups operating under the same standards.

And it looks like the change is already starting to take place. For the first time, an online-only publication, ProPublica, was awarded a Pulitzer Prize for reporting.

That type of recognition could lead to a level of accountability for all online platforms — but only if the public demands it.