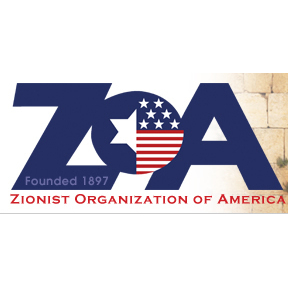 ZOA Praises Google For Removing False Anti-Israel Propaganda From Google Earth’s Map Of Israel, Jewish News Today, August 25, 2008. This was a copy of the press release issued by the ZOA.

The Zionist Organization of America (ZOA) applauds Google Inc. (Google) for rectifying several problems that the ZOA raised with Google’s leadership, regarding Google Earth’s satellite map of Israel.  Google Earth is intended to be a geographic resource for its users.  But in a detailed letter to Google dated July 15, 2008, the ZOA asserted that when Google Earth users “flew to” Google Earth’s satellite map of Israel to obtain geographical information about the state, they would get more than geography.  They would also get “false and demonizing political propaganda about Jews and Israel,” which appeared to be endorsed by Google.  The ZOA urged Google to rectify this problem, so that “Google Earth stops promoting and disseminating misinformation that misleads its users.”  Google has responded to the ZOA’s claims and addressed its concerns by removing the entire “Best of Google Earth Community” layer (i.e., Google Earth’s selection of content that has been contributed by outside users), which had been automatically visible from the satellite map, and which contained the offensive and inflammatory material.

One of the problems that the ZOA complained about was the anti-Israel propaganda posted by an individual named Thameen Darby.  When Google Earth users would “fly to” the map of Israel, they would automatically see orange dots littering the entire map of the area.  Rolling a computer mouse over many of these dots would reveal the following message posted by Darby:  “Nakba – The Palestinian Catastrophe,” which reflected Darby’s personal view that the very existence of the State of Israel is a catastrophe for the Palestinians.  As the ZOA pointed out in its letter to Google, such propaganda “has absolutely no bearing on the area’s geography,” yet it “dominates a site that is intended to be a geographical resource for its users.”

Making matters worse was the fact that when users clicked on Thameen Darby’s orange dots, they were greeted with the message that “this is one of the Palestinian localities evacuated and destroyed after the 1948 Arab-Israeli war.”  These postings then linked to an anti-Israel propaganda site that promotes the historical falsehood that the Land of Israel was Arab land taken by Jewish colonizers, and that therefore, the Jewish State of Israel is a wrong that needs to be undone.

Following the ZOA’s complaint to Google, Google moved the propaganda posted by Darby that had been automatically visible, including all of the orange dots, from Google Earth’s satellite map of Israel.  Google has now placed Darby’s propaganda in a layer with all of the other user-created content that is easily identified as such, so that the propaganda is no longer seemingly endorsed by Google.  Instead of automatically being guided to his anti-Zionist narrative, users are now forced to affirmatively look for his material, just as they must do with all other user-generated content.

The ZOA raised a second problem with Google, which Google has also corrected.  In its letter, the ZOA asserted that when users went to the Gaza Strip on Google Earth’s satellite map, they would automatically see a yellow dot that linked to “the photographs that changed the world – Mohammed al-Durrah.”  As the ZOA pointed out to Google, “these photographs have absolutely nothing to do with the geography of the area.”  Making matters worse was the fact that legal proceedings in France, as well as numerous articles by French journalist Philippe Karsenty and others, made it clear that “these photographs depict staged events intended to demonize and incite hatred of Jews and Israel.  Thus, these photographs (and their accompanying narrative) have no place on Google Earth.”  The ZOA contended that at a minimum, Google should put this political propaganda in a separate “layer” that users must deliberately download and install, and the propaganda should be clearly labeled as user-generated, not endorsed by Google.

Google has rectified this problem.  As with Thameen Darby’s “Nakba” placemarks, these photographs – which were part of the “Best of Google Earth Community” layer and were automatically visible from the satellite map of Gaza – were removed.  They were appropriately placed in a layer with all of the other user-generated content, and no longer have the seeming endorsement of Google.

The only problem raised by the ZOA that Google has not yet addressed is the propaganda that still appears on the satellite map of Israel in the form of two rectangles labeled “Every Human Has Rights.”  When users click on these rectangles, they are treated to political propaganda about the suffering of Palestinian Arabs allegedly resulting from the so-called Israeli “occupation.”  Because this presents the same problem as the other political propaganda on Google Earth that Google has now satisfactorily addressed, the ZOA urges Google to move the rectangles into the layer with all other user-generated content, so that it is not automatically visible on the satellite map of Israel and does not seem to be endorsed by Google.

Morton A. Klein, the ZOA’s National President, praised Google for the steps it has taken:  “We are extremely pleased that Google’s response was so immediate, once the ZOA provided all the details about the inappropriate content on Google Earth.  The problems on Google Earth were particularly troubling in light of media reports that Sergey Brin, one of Google’s co-founders, and his family had left Russia because of anti-Semitism.  Here we had Mr. Brin’s own company seemingly promoting anti-Semitism.

“Much of the credit for unearthing and publicizing these problems goes to Dr. Andre Oboler, who is currently a post-doctoral fellow in political science at Bar-Ilan University in Israel, and a Legacy Heritage Fellow at NGO Monitor in Jerusalem.  We thank Dr. Oboler for his efforts and look forward to continuing to work together in combating anti-Israel propaganda on the Internet.

“Google Earth is supposed to be a resource for accurate and reliable information about the world’s geography.  It should not be a vehicle for promoting someone’s particular political agenda about Israel, especially when that agenda is based on falsehoods.

“Google plainly recognized these problems on Google Earth and addressed most of them.  Instead of automatically being guided to an anti-Semitic narrative when Google Earth users go to the satellite map of Israel, users who are seeking political propaganda about Israel now have to affirmatively look for it.

“There’s more to be done.  We urge Google to remove the remaining anti-Israel propaganda from the satellite map of Israel, or at least put it in the same layer with the rest of the clearly marked user-generated content.  This would protect Google Earth’s integrity and reputation as an accurate and responsible resource tool, and would prevent it from becoming known as a company that promotes anti-Semitism.”

This entry was posted in In the media, News Commentary and tagged google, Google Earth, oboler, Zionist Organization of America, ZOA, ZOA-source. Bookmark the permalink.