Is there a problem officer? Lies, dangers and hate on the information superhighway, AJC 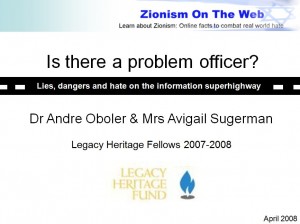 This talk was developed by myself and  Avigail Sugerman. Avigail later delivered it to a school audience.

The talk includes discussion of the AJC competition “My Israel” which was attacked and the competition website later hacked. In 24 hours the site had almost 800,000 hits – and in the last hours it tipped 1 million and garnered over 1,500 comments,  mostly venomous anti-Israel and antisemitic slurs.

This talk builds on Avigail and AJC’s experience, putting it in the context of wider problems on the internet. It also gave basic safety and advocacy advice to students.