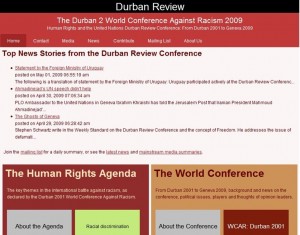 In the lead up to the United Nations Durban Review Conference, ‘Durban II’, I put together the DurbanReview.Org website.This was part of a wider public diplomacy campaign to prevent the conference being directed off track and turning into a repeat of the horrendous conference in Durban South African in 2001.

It also included a background briefing on the 2001 conference, the NGO forum and the various players trying to direct the conference of course.

DurbanReview.org featured breaking news throughout the conference itself. The details came from participants in the conference itself and we often had in-depth coverage before the story had registered with the wire services. Governments, diplomats and NGOs from around the world regularly checked in to our site. As did major news services.We ensured there could be no cover up or double standards without public global exposure.