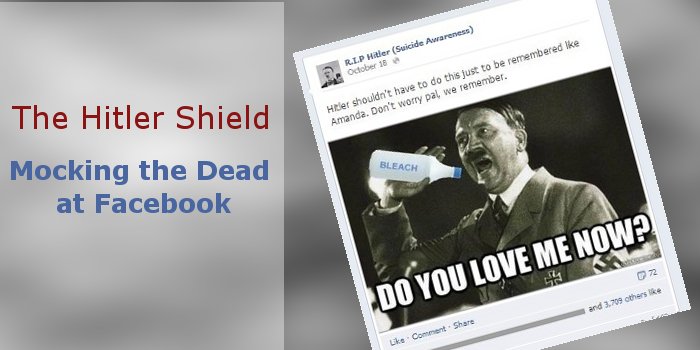 Facebook is sliding into moral decay. I would say slowly, but the pace of detrimental change appears to be increasing. The change between 2008 and today is truly shocking; the more facebook grows, the less regard it appears to have for other or for society as a whole. In 2008 Facebook’s terms of service included a prohibition on content that was “racially, ethnically or otherwise objectionable”, which was removed later that year as part of an effort to “simplify” Facebook’s rules. Until 2012, Facebook  regulations included  a general prohibition on “hateful” content, the last bastion against hate that survived the 2008 purge of ethical regulations.  This year, that prohibition was reworded to only cover “hate speech”: the difference is significant,  as hate speech only protects against hate directed at specific minority groups – in other words, a much narrower protection.

In 2011, a Facebook spokesperson told the BBC that, “the vital distinction was still between controversial discussion and genuine attempts at humour on one hand, and obvious hate speech on the other, but that content targeting a particular minority would always be removed.” This year, however, as the Online Hate Prevention Institute has reported, Facebook has refused to remove multiple pages dedicated to hate speech against Aboriginal Australians saying, “while incredibly distasteful, this content currently does not violate our terms”. They acknowledged the content may breach Australian anti-discrimination laws, adding, “while we do not remove this type of content from the site entirely unless it violates our Statement of Rights and Responsibilities, out of respect for local laws, we have restricted access to this content in Australia via Facebook.” That’s a huge backwards step.

Even before these move to normalise online hate, Facebook had one special exception: Holocaust denial. Though the reasons changed over time, Facebook has always maintained that Holocaust denial “as such” was neither hateful nor hate speech. As Matthias Küntzel explained, “Facebook seem to be viewing Holocaust denial as an expression of ignorance – a kind of intellectual error”, he added that “in the world of social networking, ideas gain legitimacy simply because they are discussed”, so this approach is “not only wrong, but also dangerous”. Facebook’s position on Holocaust denial means the best way to protect hateful content on Facebook against removal appears to be linking it to the Holocaust, a tactic I will call the “Hitler shield”. This shield threatens more than just the Jewish community.

One of the clearest uses of the Hitler Shield is the page “R.I.P Hitler (Suicide Awareness)”. The page’s description is quite clear: “It must be specified this is in no way a ‘white empowerment’ page. The sole purpose of this page is to mock the ‘R.I.P Amanda Todd’ pages and in no way do we support Hitler, the Nazis or hate towards Jewish people.”  One the one hand, this page clearly states its aim of mocking the memorial pages for a 15 year old girl, driven to suicide as a result of cyberbullying. On the other, we have the classic Antisemitism 2.0 introduction, that is, one which denies its antisemitic nature even as it promotes antisemitic ideas.

Let’s begin with mocking the death of Amanda Todd.  For those that haven’t seen it,Amanda’s video can still be seen on her YouTube account, and it’s worth watching. It shows the face of modern evil – of those who would abuse technology to destroy a life.  It depicts the brave struggle of this young Canadian girl faced with bullies who attack her online, and then in the real world. They followed her with their attacks over a period of years, and even across the country as she moved between schools and cities. She discussed her failed suicide attempt, how she was mocked and needled to try again. She did. She died. Now she is greatly missed by all who knew her, and by many who didn’t.

In Amanda’s video, she speaks of her failed effort to kill herself by drinking bleach. She shares how – six months after this – people were still posting pictures of bleach and tagged her so they appeared in her profile. She shares how one person said “She should try a different bleach, I hope she dies this time and isn’t so stupid”. Such hate has no place in a civilised society. It has no place in social media. Yet now, on the “R.I.P Hitler (Suicide Awareness)” we have an image of Hitler with a bottle of bleach edited into his hand and the comment “Hitler shouldn’t have to do this just to be remembered like Amanda. Don’t worry pal, we remember.”  The revulsion I feel personally at this image has nothing to do with the glorification of Hitler. The use of the very sort of image that led to this young girl’s death to mock her memorial pages is callous beyond belief. I strongly doubt the page owner would dare post such a picture under their own name. At an absolute minimum Facebook has to stop pages being used to provide anonymity for such behaviour.

On the antisemitism side, we have the page owner posting “To anyone who hates this page, come over, I just got a new oven and would like to see how powerful it is”. An image of the classic game “Guess Who” has been digitally altered to read “Gas who?” Another has a picture of Anne Frank with the text “This one time at camp, we got so baked” – an antisemitic meme recently used on a number of other pages on Facebook. The comments by other users are also concerning and suggest Holocaust denial is alive and well in 2012, particularly amongst people in their early 20s. The page itself is most popular in Melbourne, Australia, and with children aged 13 to 17. With its poor response to Aboriginal Memes, Facebook has in recent months dramatically increased the acceptability of online hate in the Australian school yard.  A formal complaint was lodged with the Australian Human Rights Commission against the page by the Executive Council of Australian Jewry, the Australian Jewish community’s peek representative body.

The owner of the “R.I.P Hitler (Suicide Awareness)” page also makes reference to far-right symbolism. This suggests they are a far right extremist, or someone already exposed to such extremism, and actively trying to use humour as a cover and Amanda Todd as a tool.  The page serves openly as a platform to attract others who find Hate funny, and to draw them towards an antisemitic ideology. The strategy seems to be working, with the page growing to over 28,000 people in less than a week.

The viral spread of hate is the ultimate danger of social media. This is why Facebook’s moral decay must stop. Pages are a useful feature, the Online Hate Prevention Institute’s Facebook page is a significant tool in our fight against hate, but the ability to use pages to anonymously promote hate must be removed. There is no right to anonymous free speech – not even in the United States.

The Hitler Shield must also be removed: adding Hitler to the mix should not make mocking the memorial pages for fifteen year old Amanda Todd suddenly acceptable. Facebook’s policy on the Holocaust has, perhaps inevitably, led to Hitler becoming a means of white washing hate. We remember the Holocaust to prevent hate becoming accepted in society. There is a message in Holocaust remembrance that Facebook appears to have forgotten.

This is a battle about the future not the past. We must demand the protection of governments from a technology that is turning feral.