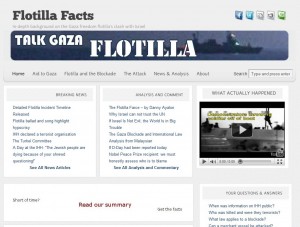 I coordinated the Community Internet Engagement Project as we created the Flotilla Facts website at talkgaza.com.

Flotilla Facts is a one-stop resource about the IHH Gaza Freedom Flotilla and its attempt to breach the Israeli naval blockade. The site provided background information and breaking news as the crisis unfolded on the high seas and in the media.

The site was created within 24 hours of the crisis developing and is a model for effective crisis communication. Through the crisis we maintained constant communication channels with the IDF, Israeli government, and senior political analysts. Our volunteers and staff summarized news stories in multiple languages and collated expert commentaries.

The site quickly became a global reference used not only by journalists and diplomats but by the wider public in online discussion. Through the site we exposed the role of IHH and broke the news of weapons ceased from the Mavi Marmara.