Making it Possible, Rather than Trying to Make it Happen 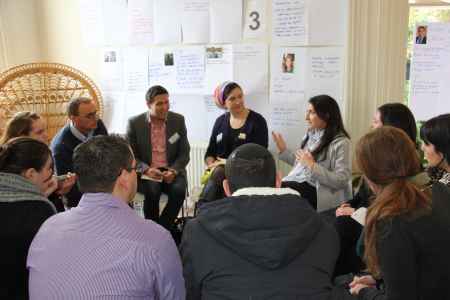 One of many discussion groups at the ROI Australia gathering. Photo: Tracie Olcha

I’ve attended three ROI Summits in Israel and each was so amazing, any words I use to describe it will fail to do the experience justice. The news that ROI was coming to Australia to run a gathering in partnership with AJF was electrifying. From the start I had great expectations for the Australian gathering. To understand how my expectations could go up, rather than down, when comparing a five day conference in Jerusalem to a gathering of just nine hours in Melbourne, you need to know something about ROI. Each and every ROI experience has been better than the last, and that spirit of constantly reinventing yourself and improving the Jewish community and the world is ROI’s true secret. The more one learns, the more amazing it becomes.

Beyond more time, something we dream about even after a five day conference, the major absence I felt at the Australian gathering was Lynn Schusterman herself.  She is a physical presence at ROI Summits, and I do mean that literally as well as symbolically. The last clear memory I have of Lynn is from my last ROI Summit. Natan Sharansky was on the podium speaking to a gathering of about 150 young people, he was telling us not to come to people like him for support to make things happen. He told us that we should do all the work without support, and when it is all done, the major organisations will be happy to add their logos and claim all the credit; and this, he told us, was the reality. Lynn, mean time, was playing peek-a-boo with the baby of one of the ROI members. Her mantra, “I make it possible, but you make it happen”, was the exact reversal of Sharansky’s speech. Perhaps more to the point, Sharansky was there as her guest, as were we all. That very moment, with young Jewish innovators from around the world gathered together, was being made possible by Lynn even as it was unfolding.

The Australian gathering too was made possible by Lynn. As Sandy Cardin, the CEO of the Charles and Lynn Schusterman Philanthropic Network told us, it was Lynn herself who told him he could only come to Australia to meet with the AJF if an ROI gathering was arranged. Lynn gets it. Sandy gets it. Elissa Krycer, an Australian staff member in the heart of ROI in Jerusalem and the ROI convenor of the Australian gathering, she gets it too. Through this visit, I hope others start to get it a little more as well. What’s to get? Well, there are two very simple ideas.

The first idea relates to “young people”. Asked to define young people at a talk to communal professionals, Sandy explained they saw it stretching up to around 40 years old. The ROI age range is around 25 to around 40. People in this age range are mature, professional, experienced, and trying to give. All too often our Australian Jewish community shuts them down and pushes them away; past national AUJS presidents excepted – sometimes. ROI recognises that people in their 20s and 30s are capable of running major initiatives, projects and organisations. As Sandy put it, “they aren’t going to wait their turn” to get involved. Today’s world just doesn’t have that linear career progression anymore. The founders and often CEOs of today’s major new companies, in the tech sector that is, are “young people”. Why can’t our “young people” take the lead in Jewish causes, organisations, projects and initiatives based on Jewish values? The answer is that they can, and they do, and ROI brings these amazing people together to inspire each other, network, share ideas, and discuss the challenges they face.

ROI has always been a powerful experience for Australia participants. Sitting in Jerusalem, far from these shores, we have had the freedom to discuss the real issues holding back our community; the real problems that prevent innovation taking off; the real causes for disengagement of people from the time they leave university until the time their children enter school. For the first time, at the AJF/ROI Australian Gathering, that conversation was had in this country in more than whispered conversations between more than just two or three people. Lynn Schusterman once again made it happen, and between AJF and ROI, there is now a strong desire to grow that seed. In just three or four year’s time, this gathering will be looked back upon as the seed of change in our community. As one who knows ROI, I feel safe both making that prediction, and giving such a short time frame for the true impact to be felt.

I hope that from Sandy Cardin, the AJF learns the message of Charles and Lynn Schusterman. That message is to empower people in their 20s and 30s, and enable those with vision to turn their dreams into reality. If AJF focuses on making things possible, rather than trying to make things happen, this will soon be a very different community. We will become a community that is far richer in talent, innovation, engagement and perhaps even communal money. If this happens, Jewish life will be where it’s at for our future generations. We must stop stagnating and start encouraging innovation, new organisations and new projects. We have the talent, now let’s remove the barriers and unleash the true potential of our communities. Wouldn’t that be something to see?

Dr Andre Oboler is CEO of the Online Hate Prevention Institute. He was previously the Director of the Community Internet Engagement Project at the ZFA. Andre has been behind projects such as Meet Gilad, Stop BDS Cookbook, Talk Gaza: Flotilla Facts, Durban Review, Zionism On the Web, and many others. A preview of his newest project, Joe’s Israel, was presented at the AJF/ROI Gathering.

Originally published as: Andre Oboler, ‘Making it Possible, Rather than Trying to Make it Happen‘, Galus Australis, 30 August 2012

This entry was posted in In the media, My Op-Eds and tagged Australia, Galus Australis, ROI. Bookmark the permalink.