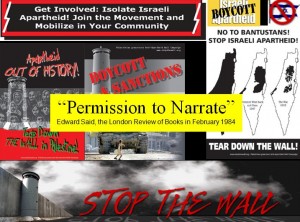 In July 2005 I presented at Limmud Oz, which took place in Sydney that year.

I gave a number of presentations, but the Hate on the Internet one was particularly popular.

The presentation looked at a Google search for the word Zionism, then showed screen shots of a number of the website that would show up in the first page of results.

The talk also focused on “Permission to Narrate”, a phrase used by Edward Said in the  London Review of Books in February 1984. More important still is its use by Nigel Parry, founder of The Electronic Intifada, as he explained his desire to control the online narrative. Parry explained, “these three words described what Said felt was most denied to the Palestinians by the international media, the power to communicate their own history to a world hypnotised by a mythological Zionist narrative of an empty Palestine that would serve as a convenient homeland for Jews around the world who had endured centuries of racism, miraculously transformed by their labour from desert to a bountiful Eden.” It was an early indication of what became the war in social media.