Zionism On The Web 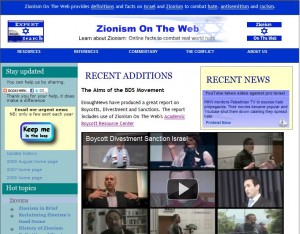 Zionism On The Web, was created when I realised the online “information” about Zionism that people were finding through search engines was mostly intentionally create propaganda aimed at spread hate against the Jewish people.

From the start, Zionism On The Web was designed to set the record straight on what Zionism was, and to combat the hateful material. Encouragement to create a site came from Gila Ansell Brauner in the Education Department at the Jewish Agency. The first incarnation of the site was made in partnership with Ami Isserof.

In 2006 Zionism On The Web was a recipient of a Top Site award from the Jewish Agency and in 2009 was described in the UK’s Jewish Chronicle by Jonathan Hoffman (co-vice chair of the UK’s Zionist Federation) as one of the best Israel advocacy sites on the internet.

This entry was posted in Campaigns and tagged Zionism, Zionism On The Web, ZOTW. Bookmark the permalink.