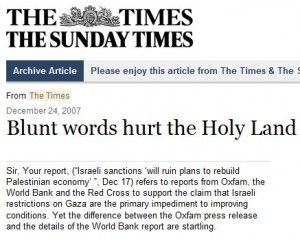 Sir, Your report, (“Israeli sanctions ‘will ruin plans to rebuild Palestinian economy’ ”, Dec 17) refers to reports from Oxfam, the World Bank and the Red Cross to support the claim that Israeli restrictions on Gaza are the primary impediment to improving conditions. Yet the difference between the Oxfam press release and the details of the World Bank report are startling.

In contrast, Oxfam ignores the role of Hamas and calls on donors to “ensure that restrictions on aid are not being used as a weapon against Palestinian civilians”. Oxfam also accuses Israel of “wrecking” projects and claims that work on the Beit Lahia sewage lake has “stalled . . . putting thousands of Palestinians at risk”, but the World Bank is able to report just three days later that “as a result of coordination with Israel . . . the work is expected to be completed by March”.

For NGOs to play a full part in the debate, they must do their research and properly consider the context.

This entry was posted in In the media, News Commentary, Publications and tagged Israel, NGOs, The Times. Bookmark the permalink.