The influence of the Internet on our lives is increasing. News, advertising, employment, education, and networking are being affected. Israel’s security is especially vulnerable to the manipulation of geography. The online world allows the creation of a virtual reality that at times bears only passing resemblance to facts on the ground. The gap between reality and virtual reality is further exploited by political activists promoting what we term “replacement geography,” a means of controlling the virtual representation of land in place of controlling the land itself. In an information age, control on the common map may be worth more in negotiations than control on the ground.

With a user base of 400 million,1 Google Earth uses satellite imagery combined with maps, terrain, and 3D buildings to present the earth at various levels of magnification. Key features (geography, place details, pictures, etc.) are included with the download of Google Earth in what is known as a “core layer.” Users can also download “custom layers” created by other users, which provide educational, historical, or special interest information to be accessed by those wishing to take the Google Earth experience further.

The Google Earth website was the 8th most searched for website in the UK at the start of 2006.2 The user base in June 2007 was 200 million,3 up 100 percent from reports 10 months earlier.4 The application has broad appeal, with almost a quarter of the visitors to Google Earth over the age of 55.5 Google Earth has been used by campaign groups to raise public awareness; examples include grass roots environmental campaigns that created a layer with information against deforestation; a WWF (World Wide Fund for Nature) layer showing large-scale environmental and socioeconomic shifts; and the United States Holocaust Memorial Museum which created a layer with information on the crisis in Darfur. These projects were custom layers which users could add to Google Earth.6

Virtual Israel, as represented by Google Earth, is littered with dozens of orange dots. Orange dots represent contributions from the user community, and those appearing by default have been accepted into the core layout by Google Earth. In the case of Israel, most of these dots claim to represent “one of the Palestinian localities evacuated and destroyed after the 1948 Arab-Israeli war.” For example, Ramat Aviv, the site of Tel Aviv University, appears as Al Shaykh Muwannis. While generally Google Earth does not erase Israeli towns and kibbutzim, it has heavily integrated a politically motivated Palestinian narrative into the map of Israel. As a result, Israel is depicted as a state born out of colonial conquest rather than the return of a people from exile. Each orange dot links to the “Palestine Remembered” site, where custom layers which further advance this narrative can be obtained.

Early press reports portrayed the virtual Palestine initiative as documentation of fact and included Israeli comments that it was “biased but legitimate.”7 Later research showed that many of the claims staked out in Google Earth were presenting misinformation. Kiryat Yam was wrongly claimed to be built on the Palestinian village of Ghawarina. Many sites known to be ruins in 1946 are claimed to be villages destroyed in 1948. Arab villages which still exist today are listed as sites of destruction.8 The Google Earth initiative is not only creating a virtual Palestine, it is creating a falsification of history.

Google Earth’s core information also includes other problems. Previously, areas beyond the “green line” were labelled as “Occupied Territories,” a phraseology which is sometimes used to justify terrorism, rather than “disputed territories.”9 The area listed as “occupied” also included the Temple Mount in Jerusalem.10 Google Earth places Mt. Scopus and its Hebrew University campus in Jerusalem within Jordanian territory prior to 1967, even though it was an area where Israel exercised control during that period, according to the 1949 Armistice Agreement.

In March 2008 the Gaza Strip was still listed as “Israeli-occupied,” despite Israel’s full withdrawal in 2005 and the military takeover of the Strip by Hamas in mid-2007. By May 2008 (after press coverage), the label was changed to read “Gaza Strip.” A note states: “Many sources still regard the Gaza Strip as ‘Israeli-occupied’ despite formal Israeli withdrawal in September 2005.”11 There is still no mention of Hamas‘ control.

“Replacement geography” builds on the concept of “replacement theology,” a position that spurred anti-Semitism within the church and which, starting with Vatican II, has been removed from Christian doctrine. Indeed, it has been stated that recognition of the State of Israel by the Vatican completed this process.12 Replacement theology stated that Christians had inherited the covenant and replaced the Jews as the chosen people. The concept of replacement geography similarly replaces the historical connection of one people to the land with a connection between another people and the land.

This was famously applied by the Romans when they renamed Judea to Palaestinia, and Jerusalem to Aelia Capitolina in 135 CE in an effort to destroy the Jewish people after the Bar Kokhba revolt. In more recent times, replacement geography has resulted in the destruction of Jewish artifacts at the Temple Mount.13

The inclusion of virtual Palestine, superimposed on Israel in the core layer of Google Earth, is an example of replacement geography advanced by technology. Those wishing to find directions, explore the cities of Israel, or randomly wander across this small piece of land are immediately taken to a politically motivated narrative unrelated to their quest. This is the sort of replacement the ancient Romans tried and failed to achieve. The promotion of a replacement narrative works against a compromise solution to the Israeli-Palestinian conflict, inspiring absolutist positions rather than a negotiated settlement. 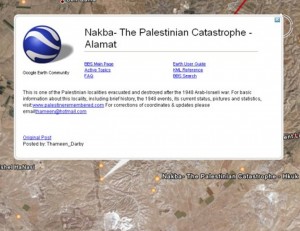 Generally, Google allows all kinds of organizations or individuals to create overlays with their own information on its map. These overlays are only available to those who specifically request them, but they are not automatically incorporated into the core map of Google Earth that every user entering its website can see. Disturbingly, Google has incorporated the Palestinians’ overlays and their accompanying narrative into its core maps of Israel. As Google maintains editorial control over its core layer, it has responsibility for its content, which it clearly has not adequately exercised.

Google Earth presents a tremendous challenge by allowing historical revisionism. Maps of the world have changed with evolving historical circumstances everywhere. Yet theoretically, with this tool, organizations seeking to make a claim for Mexican sovereignty over territories incorporated into the U.S. in the nineteenth century could raise such arguments by revising the map of Texas or California. Rather than serving as an educational resource, Google Earth could simply evolve into a website for political warfare.

For those who do not physically visit Israel, the “facts” on this virtual ground are real. It is to be expected that people will form their opinion on issues such as borders, land rights, and historic connection based on sources like Google Earth. The social propagation of a narrative of Israeli aggression and ethnic cleansing – an aspect of “Anti-Semitism 2.0”14 – is spread through Google Earth.

Without a response that includes new information about the historical connection of the Jewish people to Israel throughout the ages, as well as modern Israeli history and the Israel of today, the world’s opinion of Israel can only grow dimmer. An increase in content – assuming Google will eventually add it to the core layer, something that is far from certain – would address the vast imbalance, yet do little for the user experience.

A far better solution would be for Google to remove the narrative and treat Israel as it treats every other country on the globe. Both the Palestinian narrative and promotion of Israel can have their place, but this should be in optional layers. The core layer of Google Earth should be ideology free and not serve as a platform for indoctrination or a campaign to wipe Israel off the virtual map.

12. Padraic O’Hare, The Enduring Covenant: The Education of Christians and the End of Antisemitism, (Pennsylvania: Trinity Press International, 1997).

Dr. Andre Oboler is a social media expert. He holds a Ph.D. in computer science from Lancaster University, UK and is a Post-Doctoral Fellow in Political Science at Bar-Ilan University in Israel. He is currently a Legacy Heritage Fellow at NGO Monitor in Jerusalem, and edits ZionismOnTheWeb.org – a website countering on-line hate.