It’s Actually Illegal To Be Racist On The Internet – Let an online abuse expert explain it for you.

The internet might seem like a lawless frontier, but if you’re racist or abusive online, you can be criminally prosecuted.

Dr Andre Oboler is is CEO of the Online Hate Prevention Institute. He has a PhD in computer science and a law degree. “We’re tackling this from both ends,” he laughs.

“We sit halfway between a human rights organisation and a tech startup.”

The OHPI is a harm prevention charity focusing on issues like racism, religious vilification and bullying online. They collect data around online hate and abuse, liaising with platforms from Facebook and Youtube down to meme generation websites, as well as collating reports to government about online speech. Oboler said the OHPI exists to combat online hate and abuse, which is often far more extreme than that which occurs in everyday life.

“Our issue isn’t just that racism occurs online, it’s that it’s completely out of sync with what we see on the street,” he said.

“In extreme cases, we have direct contacts [with social networks] and can get fast responses.”

Oboler outlined that online hate wasn’t simply a matter of hurt feelings; it can sometimes be criminal. There are laws governing the use of telecommunications devices — phones, internet, messaging services — to abuse someone. Oboler said those same laws and anti-abuse protections do not necessarily apply to words said out loud in a public place, meaning that someone can be free to speak abuse in public but prosecuted for saying it on the phone or writing it online.

“There’s a big difference between what’s said online or on the phone, and face to face. Laws were put in place to prevent telecommunications being used to abuse people, and can carry a jail term. It’s not just discrimination, it can be abuse of an individual. Online, there is a much lower threshold to what can become a criminal activity,” Oboler said.

A NSW man was charged in May for calling then-senator Nova Peris “a black c***” on Facebook. The man was given an eight-month suspended jail sentence and a two-year good behaviour bond. 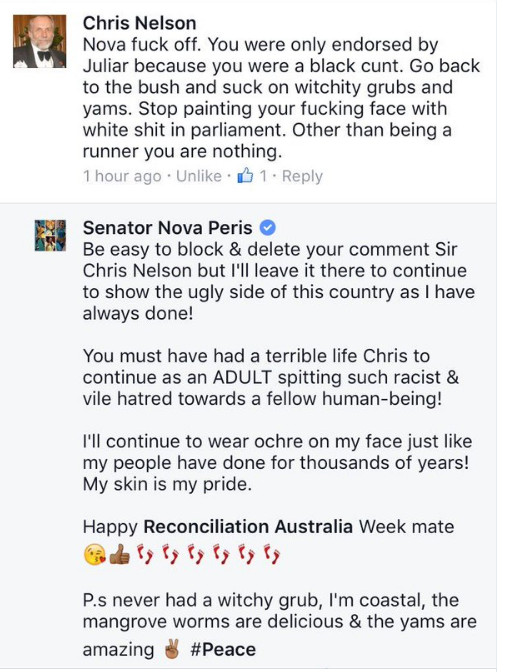 Section 474 of the Criminal Code Act outlines that it is an offence to use “a carriage service to menace, harass or cause offence” in a way that is “menacing, harassing or offensive”.

“If you said on the street some abuse against, for example, indigenous people, you could have a complaint put against you under the Racial Discrimination Act’s 18c provision, but that is part of civil law, not criminal law,” Oboler continued.

“Basically, if you’re abusing others online, you can end up in breach of criminal law. You’re talking about legal repercussions, but remember the number of suicides of people bullied into killing themselves. A few words said online are not a trivial matter.”

He also added that, despite the common defence that what some people call “abuse” might be defended by others as “free speech”, that Australia does not have an explicit right to free speech in the same way as the right is outlined in the U.S. Bill of Rights.

Australia is currently in the midst of two highly-charged, emotive, fierce and often nasty debates: marriage equality, and the One Nation-fuelled discussion about Islam in Australia. Oboler said news coverage and debate around disputed issues such as these does often lead to an increase in online hate.

“There’s been a spike [in anti-Islam speech] going on for the last few years, some anti-Muslim political parties even. I was quite surprised that that segment of the vote went to Pauline Hanson rather than those explicit groups, which were mostly founded out of online activity,” Oboler said, citing the likes of the far-right Rise Up Australia party.

“Hanson might have captured [that sentiment], become the figurehead of the movement. What she says includes some of the same views as some of the online groups, but a bit more tempered so it doesn’t look like its out there in crazy land.”

In a report last year, the OHPI claimed anti-Muslim hate “has accelerated sharply” in 2015, on the back of several high-profile terror attacks worldwide. Oboler said it was hard to predict the effect of having four One Nation members in the Senate — including Malcolm Roberts, who on Wednesday accused broadcaster Waleed Aly of condoning terrorism — on the dialogue around Islam in Australia.

“I don’t think well see a spike [in hate speech] online but a consolidation. We’ll see the people supporting these views thinking they’re part of the mainstream now,” he said.

“To one extent, it might tone things down a little, they may be more willing to try and use the democratic process. Or it could lead to some online hostility, with people not comfortable expressing those sentiments at work, school.”

On the marriage equality debate and the plan for a plebiscite on the issue, Oboler said he feared a surge in anti-LGBTI abuse was imminent.

“[The debate and plebiscite] makes attacking a segment of the community appear like a legitimate political position. We may start seeing actual attacks. This is a very good reason not to have a plebiscite,” he said.

“We’ve seen a little bit of an uptick [in anti-LGBTI speech], but we’re not in the proper campaign yet. It’s coming, there will be a very strong uptick.”

He said laws around abuse of LGBTI people, unlike abuse based on race, were different in different states, and said Australia needed to look at national legislation.

“In NSW, it’s illegal to vilify an LGBTI person, but in Victoria, it’s not. That’s where our discrimination laws are vastly different across Australia,” he said. He added that when a person was in one state and sending abuse to someone in another state, the law got tricky — which state’s laws apply?

“When you have a national plebiscite, it matters where the person is where they are making the comment,” Oboler said.

“It’s difficult for the public to understand.”

The Online Hate Prevention Institute has a range of resources and reporting tools to address online abuse. For more information, click here.

Source: Josh Butler, “It’s Actually Illegal To Be Racist On The Internet – Let an online abuse expert explain it for you.” The Huffington Post, 22 September 2016