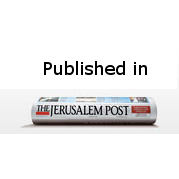 The Palestinian push for statehood is being promoted in every way possible, by legitimate, questionable and outright illegal means. The illegal means will likely include cyber attacks on the websites and servers of the Israeli Government, Israeli companies, and Jewish and Zionist organisations worldwide. There has already been a small wave of cyber attacks by Turkish hackers resulting in a general spike in hacking activity against Israel. As the Palestinian campaign heats up, and in the aftermath of the inevitable disappointment, Jewish and Israeli computer systems will be at increased risk.

Leaders of commerce, industry and the community need to take precautionary measures to protect online assets and mitigate against illegal cyber attacks. Those responsible for maintaining community websites should take a moment to backup their data, update web based software applications and apply security patches to organisations servers and computers. Most communal organisations will not have in house technical expertise and will need to pay for external support staff, however the small cost of mitigation (typically $50 to $250) could prevent major disruption and far greater costs later on.

Having dealt with anti-Israel hackers during times of crisis before, particularly during the 2006 second Lebanon war, the good news is that Israel’s official sites and infrastructure are far better protected now than they were back then. In some sense this increases the risk to Jewish community infrastructure outside Israel which, as a softer target, may now be far more attractive.

Back in the grey area, in my last column I discussed a public relations campaign run by the Avaaz organisation in support of a Palestinian state.  The campaign appears to misuse, or perhaps invent, statistics to demonstrate a grassroots groundswell of support. Avaaz has paid for online surveys to support its point of view, and in so doing, it managed to get its highly questionable campaign statistics (which are unrelated to the survey itself) included in an article by the UK’s Guardian Newspaper. The newspaper has effectively been recruited, knowingly or unknowingly, in the propagation of misleading propaganda. The media should take a lesson in caution when accepting information from advocacy organisations.

However much we may disagree with the Palestinian efforts to undermine the peace process through unilateral action, their right to legitimate campaigning must be respected. This does not extent to illegal activity, be it cyber attacks or acts of terrorism. In the heat of the coming weeks, I fear some may promote the idea that the ends justify the means. I can only hope people of good conscience will object, and that those who can, will take the needed steps to protect our online infrastructure.

This entry was posted in In the media, My Op-Eds and tagged cyber attack, cyber security, hackers, Jerusalem Post. Bookmark the permalink.