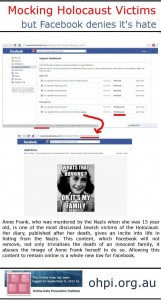 The social media platform Facebook is in now eight and a half years old. For over half that time I have been researching and writing about Facebook’s potential to spread antisemitism and other forms of hate. I warned of the potential danger in my first Jerusalem Post op-ed back in 2008. Sincethen various incidents have arisen, and when Facebook went public I dared to hope this might lead to an improvement. Facebook seems determined to dash my optimism.

The latest outrage involves Facebook sanctioning antisemitic content by dismissing complaints against clear cases of racist hate speech. In one example a picture of a smiling Anne Frank is overlayed with the text “What’s that burning? Oh, it’s my family”. Anotherdepicts a computer keyboard button labelled “Delete Israel” and the text “The much needed button”.  Other examples include Holocaust denial and blood libel. Each of these examples was reported to Facebook, and each of these complaints was resolved with the decision “Not Removed”. The system has no appeal process.

These revelations take the problem from one of an inability to quickly control user generated content, to a problem of institutional antisemitism. A UK inquiry described institutional racism as: “The collective failure of an organisation to provide an appropriate and professional service to people because of their colour, culture, or ethnic origin. It can be seen or detected in processes, attitudes and behaviour which amount to discrimination through unwitting prejudice, ignorance, thoughtlessness and racist stereotyping which disadvantage minority ethnic people.” Whether through active prejudice or simply ignorance, the failure of Facebook staff to correctly assess antisemitic content discriminates against Jewish people.

We are not alone. Facebook has also recently been in an extended dispute with Australian human rights authorities and government regulators over racist content targeting Australian Indigenous people. Regulators went as far as classifying the content to makes its distribution in Australia illegal, and Facebook eventually blocked the content, but only to users in Australia.

The trend the Online Hate Prevention Institute is seeing is for Facebook to deny individual items of content are racists, take pages offline to review them, and then offer the administrator a choice of deleting the page or renaming it so it contains a prefix “Controversial Humor”. Once renamed, Facebook staff then make the material publically available again. In those rare cases Facebook regards as violations, page administrators are banned from Facebook for 24 hours. They soon return and begin publically vowing to continue their campaign of hate.

Having been personally targeted with three fake profiles and three antisemitic pages that used my picture, all of which were removed, it appears to me that Facebook will respond when a person is attacked, but not when a group is attacked. This distinction is not consistent with the meaning of hate speech, a term designed to protect minority groups from group defamation as well as personal attack for being a member of the group.

In addition to the problem with their review staff, the very nature of Facebook pages is problematic. Rather than restricting pages to legal entities (such as companies), Facebook allows anyone to create a page for any purpose. The user can then interact with the rest of Facebook, as well as their own Fans, using the identity of the page. This grants them anonymity and masks their personal account. This is a complete reversal from the early days when Facebook accounts had to be tied to a real identify verified through the use of an e-mail account from a recognised academic institution. Back in those days Facebook aimed to provide a safe environment. That aim seems to have long ago been jettisoned.

For now, all we can do is demand change. We can demand the antisemitic pages are removed. We can demand the users responsible are permanently banned, not just suspended for a day or two. We can demand Facebook improve its systems and add a system of auditing to ensure the quality of its complain management systems. We can demand an appeal process. These demands need to be made. The Online Hate Prevention Institute has started a Petition, join me and let’s see some change. This sanctioning of hate simply can’t continue.

Dr Andre Oboler is CEO of the Online Hate Prevention Institute, an Australian-based NGO globally tackling online hate. He is also co-chair of the Online Antisemitism Working Group of the Global Forum to Combat Antisemitism.

This entry was posted in In the media, My Op-Eds and tagged Anne Frank, Antisemitism 2.0, Facebook, Jerusalem Post, OHPI, online hate. Bookmark the permalink.