The social media is the message 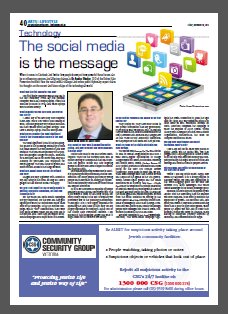 When it comes to Facebook and Twitter few people know just how powerful these forums can be in influencing opinions and affecting change as Dr Andre Oboler, CEO of the Online Hate Prevention Institute. Here the social-media strategist and online public diplomacy expert shares his thoughts on the current and future shape of the technological world.

What was the first computer you had?

Our first family computerwas an IBM286 in the late 1980s/early 1990s. My first personal computer was a 486 Compaq laptop. I used this machine in school in 1994, back when laptops were a serious novelty.

What computer do you have now, and why do you rate it?

I doubt any of us have only one computer these days. I use a Dell Vostro 220s Desktop at work. Dells are generally very reliable machines, and their website often has great savings. I also have a desktop, laptop, iPad and smartphone.

What do you consider the most significant trend in the technological sphere in the past decade?

The most significant trend in the technological sphere is the increasing availability of tools thatmake sense of the vast amount of data now available. The trend underliesmany of the popular technologies: Google for search, Facebook for advertisers, IMDB for movie fans, eBay and Amazon for purchases, and Wikipedia for everything else. The trend is one of greater, and more efficient, access to the things we want.

What one gadget could you not live without and why?

Gadgets are only a gateway. With almost all my data being in the cloud, so long as I have a gadget that has internet access, I’m happy.

We hear a lot about the use of social media in political and social campaigns, but just how influential is it?

For the under-30s, social-media campaigns are very important. For the over-30s, they gain significance when the mainstream media takes note of the campaign. In the US election campaign, within “race” classifications, there were clear splits between under-30s and over-30s in the exit-poll data. I can’t help but suspect social media campaigns are a major factor in the result.

One aspect of your work is combating online racism. Just how prevalent and how dangerous is online hate?

Online hate leads to real and serious health impacts. There are the obvious cases, such as
online bullying or homophobia that lead to suicide, but general racism and hate targeting
groups in society also have an impact on mental and physical health.

Hate makes people feel unwelcome in a society, including online platforms and online communities. For many people, particularly young people and those under 30, losing their connection to online society cuts them off from friends and support structures.

In 2012,we have seen an explosion of people seeking to spread hate and bullying for fun. This is not always a result of hard-core racism, but often closely related to the sort of stupidity we previously saw in the planking phenomenon. Those aged 13 to 17 are largely responsible for spreading the hate, those in their early 20s are largely responsible for creating it. As the CEOof the Online Hate Prevention Institute, I am alarmed at this increasing danger and what it might mean for the future of our society.

Do we control Facebook and Google or do they control us?

They control us. They have more access to our private information than any government. They control what we see and read. In Australia they are unafraid to declare themselves above the law; I have seen both Facebook and Google have do this. These are not democratic institutions, we the people are their assets, not their patrons.

What are some of the digital strategies you have devised?

The earliest was Zionism On TheWeb, started in 2004 to combat delegitimisation and BDS. I used search-engine optimisation to change Google results for a search on Zionism, removing anti-Semitic search results. Durban Review, an ADC project, provided an information and news portal for the 2009 UN Durban Review Conference. From access to email lists, we provided news coverage faster than the wire services and helped set the agenda as the UN, governments, human-rights groups and the media monitored us as a source. Talk Gaza – Flotilla Fact,under the auspices of the Zionist Federation
of Australia,was up and running within hours of theMaviMarmara Flotilla incident. It helped set themedia agenda and was so successful, activists from the flotilla contacted us offering to add more balance. Meet Gilad collected tens of thousands of messages to Gilad Shalit through a custom-built web-platform and mobile technology; people enter messages into iPads at Jewish conferences in Australia, the USA and Israel.

My latest campaign is Joe’s Israel (www.joesisrael.com). This social-media campaign highlights the Jewish connection to Israel, the legal basis for Israel, and why unjustified attacks on Israel cause us such frustration. Focused on North American campuses, the campaign is under the auspices of AICE (Jewish Virtual Library) with the support of Hillel, World Zionist Organisation, StandWithUs, the Israel on Campus Coalition and others.

We now have smartphones and smart televisions. What’s next?

I see a day, not too far, when your phone, or similar device, will be carried with you then
plugged into a docking station at home, at work or on the train.With sufficient memory and complete portability, this might see a lot of critical data moving back from the cloud to people’s devices.

Twitter I am less certain about. Skype, now owned by Microsoft, is in a strong position to
challenge Twitter. We could see competition in this micro-blogging space like we once saw
between ICQ, MSN Messenger, and Yahoo Instant Messenger in the instant messenger space.

Facebook is here to stay, but its popularitywill decline. First the advertisers, then the audience will leave. Facebook, in an effort to maintain the appearance of growth, has sacrificed both data quality and values. It may soon be seen as nothing more than a place to play online games, where people by default use fake data to create their
accounts. Profiles will move to LinkedIn, photo sharing to Instagram (recently acquired by
Facebook), and communication to Skype.

This interview with Dr Andre Oboler was originally published as: ‘The social media is the message’, The Australian Jewish News, November 30 2012, p 40.