My report for the Online Hate Prevention Institute into antisemitism on Facebook was released to coincide with the International Day for the Elimination of Racial Discrimination on March 21st 2013. 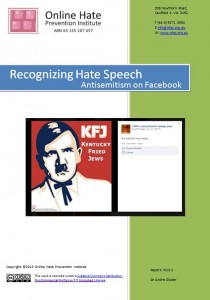 The report tracks the response to a number of antisemitic items on Facebook. Some of the items were included in a previous report in 2012 into Aboriginal Memes and Online Hate, others were new in 2013. The report shows how some items are removed by Facebook while others remain online, some for more than 6 months. The report examines what Facebook removes and what sort of content Facebook does not consider hate speech and refuses to remove. The findings show that Facebook does not really understand antisemitism and has trouble recognizing certain very well known types of antisemitism.

The report shows Facebook has difficulty identifying racism directly based on Nazi propaganda; consistently refusing to recognize as hate speech pages promoting the famous antisemitic forgery used to inspire mass killings, the Protocols of the Elders of Zion; and failing to take action on new antisemitism which uses Holocaust inversion to paint Israel and Jews as Nazis. These blind spots can be added to the known difficulty Facebook has in recognizing Holocaust denial as Hate Speech.

This entry was posted in Publications, Reports and tagged antisemitism, Antisemitism 2.0, Facebook, Nazi, Protocols, Protocols of the Elders of Zion. Bookmark the permalink.