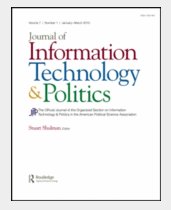 Wikipedia is the most popular information reference site on the Internet (Tancer, 2007), advertising itself as “the free encyclopedia that anyone can edit” (Wikipedia, 2008a). Through digital mass participation by “Wikipedians” (also known as “editors” or “users”), Wikipedia aims to prevent bias and provide a neutral point of view (NPOV) (Ayers, 2006).

Wikipedia’s approach has, however, raised concerns (Lichtenstein, 2008) that are traditionally reserved for the mass media. For instance, the media has long acted as a gatekeeper, selecting and framing issues in what was perceived to be the public interest (Williams & Delli Carpini, 2004). The management of public discourse through framing raises significant political implications and bias from framing effects and has been researched in multiple disciplines (Goffman, 1974; Hall, 1973; Kahneman & Tversky, 1979; Snow, Rochford, Worden, & Benford,1986).

In this article, we discuss Wikipedia’s approach to reducing bias, and introduce criticism elimination, an approach that creates a framing effect through information removal.1 This approach targets a vulnerability in Wikipedia’s decentralized editing process, which, when used systematically, can ultimately lead to gatekeeping (Lewin, 1947) that conflicts with Wikipedia policy. We demonstrate criticism elimination through an empirical analysis of Wikipedia change logs across 16 similar articles. We categorize those using this approach into four types of users and show that some act as gatekeepers.

The presence of politically motivated framing (rather than the expected NPOV), as well as gatekeepers, sanctioned or de facto, has serious implications for the understanding of content production in Wikipedia. Taking into account the different types of users, we suggest approaches to mitigate or prevent inappropriate framing through criticism elimination. Our methodology and analysis can serve as a basis for further work to extend the academic theory on Wikipedia and its socio-political-ethical aspects. Further research on Wikipedia is needed by both political scientists and social media theorists.

Wikipedia is a hypertext-based, electronic encyclopedia that blurs the roles of author and reader. This concept was first raised by Smith in 1989, 12 years before Wikipedia launched. Authored collectively by the public, Wikipedia is the most popular educational reference site on the Internet, receiving 24.3 percent of visits in this category of over 3,000 sites (Tancer, 2007). It is characterized by high accessibility, a large contributor community, and an even larger readership. The English Wikipedia contained 2,172,925 articles as of January 18, 2008 (Wikipedia, 2008d), and had 158,065 contributors, 42,351 of whom make more than five edits per month (Wikimedia, 2008). It is the seventh most popular Internet site (Alexa Internet, Inc., 2008), and the site most people go to from the results of a Google search (Tancer, 2007).

Wikipedia has been praised as a significant advance in knowledge management (Benkler, 2006; Greenstein, 2007; Olleros, 2008; Zittrain, 2008). Forte and Bruckman (2008) specifically praise it for “highly refined policies, norms … [and an architecture that] supports organizational ideals of consensus building and discussion” (p. 1) Co-founder Larry Sanger, however, noted in 2004 that “the dominance of difficult people, trolls, and their enablers” creates a “poisonous social or political atmosphere.”

Difficult people can lead to quality problems. The journal Nature (Giles, 2005), however, showed that science-based articles in Wikipedia have similar error rates to articles in Britannica, as measured using peer review.2 Richard Waters (2006), reporting this in the Financial Times, notes that Wikipedia is “pretty good at explaining the basic facts (the focus of the Nature experiment) … [but] things start to go awry when it comes to less clear-cut issues—history, say, or politics.”

The problem in subjective areas is that Wikipedia articles can be dominated. Sunstein (2006) notes that the last editor “can appoint himself as sovereign” (p. 158) destroying, rather than aggregating, content. Stacy Schiff (2006), writing in The New Yorker, noted that more frequent editors generally get their way. Articles or entire topic areas can be framed with a particular view by users with knowledge, determination, and power within the system. Environmentalist Lawrence Solomon (2008) explored this in Wikipedia articles on global warming and climate change research. Wilkinson and Huberman (2007) show a related result with an article’s quality being strongly correlated to the quantity of edits it receives. Popular articles are harder to dominate.

By dominating articles and topic areas, Wikipedia can be used as a platform for political propaganda. Paul Murphy (2008) called Wikipedia “an early and illustrative warning of the collapse from informed social networking to propaganda.” He explained that “sub-groups of the general community … are now using Wikipedia as a marketing tool for their viewpoints.” He called it “fundamentally inappropriate in a site nominally dedicated to the provision of objective information.” He raises a concern that those with an agenda will be more dedicated to getting their point across than casual users, thereby allowing them to dominate.