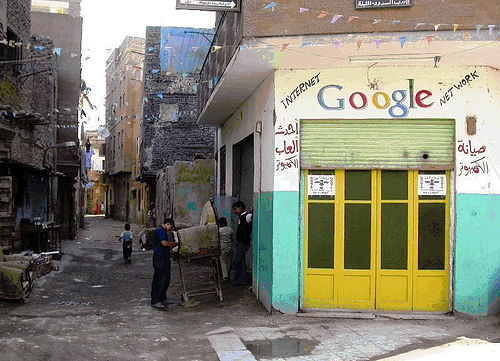 The Egyptian Government has become the first in the world to turn off its the internet. As of January 28, almost all internet servers in Egypt are offline. Homes, businesses, foreign embassies, and Egyptian government departments are without internet access. Text messaging services (SMS) have also been turned off.

The move aims to prevent the Egyptian people from protesting, and Egyptian officials have specifically called on people not to congregate in public places after prayers. Renesys notes that the shutdown is reminiscent of efforts in Iran and Tunisia to slow the internet or shut down some main internet connections. The real purpose however is more in line with a “government crackdown on peace, goodwill, and social media.” It aims to discredit, disrupt, and ultimately censor anti-government protest.

The Encyclopedia of Terrorism lists the move to cut communications infrastructure as part of asymmetric warfare. It states, “Guerrilla tactics include ambush, avoiding open battle, cutting communication lines, and generally harassing the enemy.” In this case, the tactic is being used by the state, not the protestors. In cutting communications a state has more options. Egypt’s move is deep; they have effectively put a stop to almost all forms of modern mass communication.

The move was clearly the final stage in a planned shutdown. It started on Tuesday with efforts to block Twitter and Facebook. Twitter responded (in two tweets due to length) saying: “We can confirm that Twitter was blocked in Egypt around 8am PT today. It is impacting both Twitter.com & applications. (1/2)” and “Re Egypt block: We believe that the open exchange of info & views benefits societies & helps govts better connect w/ their people. (2/2).” The story was picked up by the media, including The Los Angeles Times, who kept following the story, reporting two days later that the block had extended to Blackberry service.

The final stage was a complete Internet blackout. It was well planned, with multiple connection points going down simultaneously. Huffington Post reports that the trigger seems to have been a video from AP showing anti-government protestors being shot. It’s likely it was simply part of a graduated response that was escalating as it became clear protests would not be halted.

The final move stops not only coordination by anti-government forces, but also communication among Egyptian citizens, and communication between Egyptian citizens and the outside world. If we think of the internet as river, with little boats carrying boxes of “YouTube,” “Facebook,” “Twitter,” “e-mail,” and other types of messages, what Egypt has done upstream is build a giant dam.

The problem with dams, of course, is that the pressure will continue to build. Without an outlet, the communication cutoff will drive more people to protest and to engage in more grass roots and local activism. Equally significant, when the internet turns back on, the dam will break—and the flood of anti-government sentiment will likely drown everything in its path. Let’s not forget, the internet can’t stay off for long; commerce, government and modern society is just too dependent on it. While the shutdown may have been meticulously planned, likely with military precision, like most wars, the question of “afterwards” is unlikely to have been asked, let alone answered.

One thing however is clear: sovereign nations do ultimately control the internet within their borders. Egypt has shown they can ultimately turn it off. Technology companies, citizens, and the internet industry should take note. Once the road was free, without rules; then, government stepped in. The same will inevitably happen with the internet, and what the resulting balance it, and what rights the public have to unimpeded connectivity, is a matter not for companies but for the social contract between citizens and government. If something is to be salvaged from the current chaos, it may be the recognition of connectivity as a new human right in a globalised world. For now, let’s just hope the lights stay on and the Egyptians still remember their Morse code.

Andre Oboler is a social media expert and director of the Community Internet Engagement Project. He holds a PhD in Computer Science from Lancaster University (UK) and was a Post Doctoral Fellow in Political Science at Bar-Ilan University (Israel).