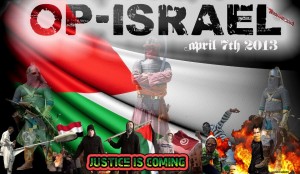 The first news of an planned new cyber attack against Israel , scheduled for April 7 2013, was announced back on March the 11th, almost a full month before the scheduled attack. The attack is a face saving effort to renew a campaign from last November which was nothing less than a miserable failure. Theprevious campaign saw over 44 million attacks by Anonymous on Israeli government servers, yet in the end only one server was noticeable impacted, and it just went a little wobbly under the increased load.

Given their past failure, a bit more can be expected from the new attack. The Times of Israel reports that the 100 largest websites in the country including banks, credit card companies, and communications firms are said to be targeted. This of course is nothing new, these days they are routinely targeted. My own analysis uncovered a list of over 1350 specific targets including research organisations like NGO-Monitor, human rights organisations like the Association for Civil Rights in Israel and even theHistadrut. The list also included the Prime Minister’s Office, Finance Ministry, Foreign Ministry, the Judiciary, Health Ministry, Trade Ministry, the Knesset and many others.  In addition to 110 government servers, the list includes 318 academic servers, 582 company websites, and 448 organisations.

Given past experience, the government servers and most of the companies and academic servers would likely stand up to ever a sever distributed denial of service attack. Such “actions” are becoming almost routine. The real impact will likely be felt by human rights organisations and civil society organisations rely on cheap shared hosting and will likely go off line temporarily if they come under attack. The more serious risk, however, comes from the real hackers rather than these script kiddies. The new attack has a number of named hacker and groups with past form listed as supporting it. In fact, this new attack seems to be bringing together more groups than ever before.

Over a year ago I warned that Iran was impersonating Anonymous in an effort to turn it on Israel. Evidence from Facebook show a number of specific hacking groups behind the April 7th threat are Iranian backed and some are thought to have Iranian state sponsorship. These groups include the Iranian Cyber Army, Remember Emad (a joint project sources in Lebanon and state backing) and Parastoo (which reportedly has ties to IRGC-QF and Hezbollah ). In the case of Parastoo direct mention is made of psychological warfare and of efforts to advertise the attack in advance with the aim of spreading chaos and pushing Israeli actors into taking preventative action that causes further disruption. Given the timing of this new attack, and questions over what Obama and Netanyahu agrees during the recent Presidential visit, one has to wonder at the timing of this new attack.

Last year the FBI arrested several hackers from anonymous. FBI Director Robert S. Mueller III warned at the time that “we should not forget that you want to identify these individuals who are responsible for these crimes, investigate them, prosecute them and put them in jail for a substantial period of time.” He also warned of the use of hackers by terrorists. The US Government would no doubt be very interested in any identification data linked to Anonymous hackers that Israeli authorities are willing to provide. There will be plenty of Israeli geeks looking forward to the challenge – and quite capable of coming out on top.

A new post from April 7th, #OpIsrael backfires, has further updates on this story.