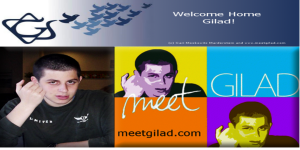 The release of Gilad Shalit from more than five years of illegal captivity was a day of both joy and fear for all Israelis, and for Jews around the world.  Shalit, kidnapped as a 19-year-old soldier doing compulsory service in Israel, was exchanged for 1027 Palestinian prisoners, many of them terrorists serving life sentences for murder who told journalists upon release that they intend to return to terrorist activity.

Put simply, the deal that freed Gilad also released murderers who had targeted children in the past, and who wished to do so again. We don’t know what the cost of releasing so many convicted terrorists might be. What we do know is that we value life, and the return of Gilad Shalit is in keeping with this moral value.

Over the years, a number of grassroots campaigns had formed to support Gilad or to promote his release. The Meet Gilad campaign, created by the Community Internet Engagement Project of the Zionist Federation of Australia, launched two years ago. The campaign’s core activity was to encourage people to write letters of support to Gilad and to display the letters publicly. There was no political dimension to the campaign directed at the Israeli government. We did not take a position on a prisoner swap, and embraced the deal only after Israel had taken its decision.

While the activity focused on Gilad, the campaign was a Zionist project that supported all of Israel. Like the campaign for soviet Jewry, it was about doing what was right. For many in the Diaspora, campaigning for Gilad’s release was not an option but an imperative. It gave expression to our core Jewish values of the respect for human life, and the freeing of captives.

To avoid an ideological conflict, we chose to focus our campaign on pressuring the international community to do more to secure Gilad’s release, or at least improve his conditions. This helped highlight the failure of international law, and the ineffectiveness of the Red Cross. When people told us it would be more effective to pressure the government of Israel, we explained why we could not and would not do that.

Even with our international focus, a few Zionist groups and leaders chose not to engage with the campaign. Some had already written Gilad off as lost, others felt it best not to speak about him in order to avoid any pressure on Israel to reach a deal with the Hamas terrorists. To my mind, many of those who failed to engage failed to live up to the core meaning of being a Zionist. Zionism at its heart is an ideology, it is not about pragmatic politics, but rather about ideals. The Sixth Zionist Congress in 1903 rejected the “Uganda scheme” even though Jews in Russia were in imminent danger from Pogroms. Then, like now, doing the right thing came at a great potential cost to safety.

Some have argued in the press that the swap poses two dangers, not only are more terrorists free, but there is less incentive against terrorism as the terrorists now know a life sentence may at any time be overturned by a desperate Israeli government looking for a deal.

In response to these critics I point out that this was not the first prisoner exchange Israel has done. The incentive for capturing Israeli soldiers and even civilians was there before. It has not gone up as a result of this deal. Nor has the incentive for Hamas to kill Israelis and Jews increased; it was already a goal of their constitution and one of their priorities.

Some who argue there is a “new incentive” also argue that Israel should bring back the death penalty for very serious crimes. This would mean top terrorists, responsible for the death of dozens of men, women and children, could never be released. This suggestion ignores the Jewish value system. We value life, not death. In 1954 Israel became the first modern Western democracy to outlaw the death penalty. In an excellent article on this topic (What Gilad Shalit tells us about the respect for life in Europe, Israel and Palestine, The Telegraph, 21 October 2011) Prof Richard Landes notes that Israel’s outlawing of the death penalty came decades before many other enlightened nations, for example, Britain (1965), Sweden (1972), Canada (1976) and France (1981). Let’s not go backwards.

As Zionists there is room to disagree on policy, but ultimately, we must base our actions on what is right. Zionism is the movement for the self determination of the Jewish people. As a people we must determine our values, and we must live by them. Our tradition teaches us that he who saves a life saves the entire world. As Jews, and as Zionists, we can never ignore the potential to save a life. Ultimately the Shalit deal was done to save a life.

It may be “irrational” to swap so many convicted terrorists for a captured solider. It may be irrational to keep the murderers of dozens of children in jail, providing them with food, television and university education, rather than simply executing them for their crimes. Standing up for principles can mean behaving in a manner that is “irrational” and not utilitarian. We can be pragmatic, we can negotiate, but ultimately we must stand for something for our survival as a people to have meaning.

The captivity of Gilad Shalit showed us that Israel continues to have a central role in the lives of Jews around the world. We shared Israel’s pain at his captivity. We shared her joy on his release. Around the world Israeli flags were raised, many in places where for security reasons they had not been raised in years. Gilad’s release has shown us that Zionism is still alive and well; and the Jewish state has a Jewish soul.

Let us mark the moment, and stand together for life, for human rights, and for democracy; and let us invite all those who stood with us for Gilad, to continue to stand with Israel in the fight against terror and in defence of democracy. Israel may be on the front line, but she is not standing alone.

Dr Andre Oboler is the director of the MeetGilad.com campaign and CEO of ZionismOnTheWeb.org.  He is a former post-doctoral fellow in the political science department at Bar-Ilan (Israel) and holds a PhD in Computer Science from Lancaster University (UK). He is currently studying Law in Australia.