Wikipedia – does it work? Can it work?, IEEE 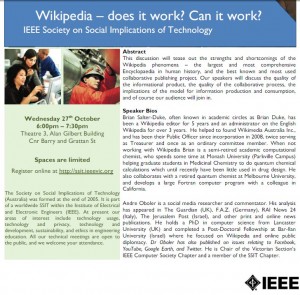 I took part in a two person panel on Wikipedia for the IEEE (The Institute of Electrical and Electronic Engineers). The talk was organized by the IEEE’s Society on Social Implications of Technology and the IEEE’s Computer Society.

This discussion will tease out the strengths and shortcomings of the Wikipedia phenomena – the largest and most comprehensive Encyclopaedia in human history, and the best known and most used collaborative publishing project. Our speakers will discuss the quality of the informational product, the quality of the collaborative process, the implications of the model for information production and consumption, and of course our audience will join in.

Brian Salter-Duke, often known in academic circles as Brian Duke, has been a Wikipedia editor for 5 years and an administrator on the English Wikipedia for over 3 years. He helped to found Wikimedia Australia Inc., and has been their Public Officer since incorporation in 2008, twice serving as Treasurer and once as an ordinary committee member. When not working with Wikipedia Brian is a semi-retired academic computational chemist, who spends some time at Monash University (Parkville Campus) helping graduate students in Medicinal Chemistry to do quantum chemical calculations which until recently have been little used in drug design. He also collaborates with a retired quantum chemist at Melbourne University, and develops a large Fortran computer program with a colleague in California.

Andre Oboler is a social media researcher and commentator. His analysis has appeared in The Guardian (UK), F.A.Z. (Germany), RAI News 24 (Italy), The Jerusalem Post (Israel), and other print and online news publications. He holds a PhD in computer science from Lancaster University (UK) and completed a Post-Doctoral Fellowship at Bar-Ilan University (Israel) where he focused on Wikipedia and online public diplomacy. Dr Oboler has also published on issues relating to Facebook, YouTube, Google Earth, and Twitter. He is Chair of the Victorian Section’s IEEE Computer Society Chapter and a member of the SSIT Chapter.