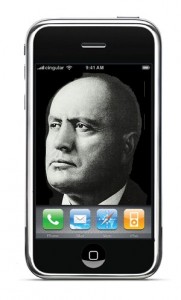 Efforts to rehabilitate Fascism via technology have already made great strides in 2010. On Holocaust Memorial day, the second most downloaded application for the Apple iPhone in Italy is a collection of speeches by Benito Mussolini, the Fascist dictator of Italy.

The application, known as “iMussolini”, was launched on January 21 and is being downloaded at a rate of over 1000 installations per day. It includes more than 120 of Mussolini’s speeches in video, audio and text formats. While the application included a warning against leaving feedback “making inopportune comments praising fascism,” Apple closed all comments on the application after a flood of pro-Fascist postings. In today’s Italy promoting Fascist ideology is illegal.

Mussolini rose to power in 1922, and in 1938 was responsible for introducing anti-Semìtic laws in Italy after he allied his country with Nazi Germany in the Second World War. These laws took away the jobs of many Italian Jews, confiscated their assets and deprived them of citizenship. Ultimately, many were deprived of their very lives, with around 8,000 Italian Jews being murdered during the Holocaust.

Professor Christopher Duggan from Reading University (UK), a biographer of Mussolini, told The Daily Mail that the popularity of this application was “further proof of the fact that during the last 20 years or so there has been a soft rehabilitation of Fascism in Italy and that it is acceptable, and really the Italian authorities should do something about it.” Those authorities were represented in Jerusalem, just weeks earlier, at the Global Forum to Combat Antisemitism. The Italian Parliament is both aware of the problem of online antisemitism – promoted by applications such as this – and the need for government action.

Unfortunately, few technology companies take social responsibility seriously. This was true both during the Holocaust, where IBM supplied machines that assisted the Nazis in administration, and last year when Facebook publicly stated that it would not remove profiles promoting Holocaust denial, despite the company’s terms of service, which prohibited hate content.

The one company that does stand out in this area is eBay, which, despite initial refusals, decided to ban the sale of Nazi memorabilia and literature back in 1999. Other companies, such as Poland’s Allegro Auction site, are under increasing pressure to follow this example after revelations of trading in fascist memorabilia and anti-Semitic content.

The iMussolini application highlights the responsibilities of both governments and technology companies to prevent not only the spread of hate, but the spread of its acceptability within the community. Facebook, it seems, is getting the message; most Holocaust denial groups created in 2010 have been removed in record time. It is, however, up to companies like Facebook and Apple, companies in touch with the “younger generation,” to take a public stand based on values. They need to clearly say that they will not be a party to the promotion of anti-Semitism, racism and hate. They need to clearly say that they view racism as wrong.

The challenge before us is to limit both the capacity for sharing hate, and the desirability for doing so. We must promote the message that society opposes anti-Semitism and other forms of discrimination. Companies like Apple and Facebook must play their part. They are in a position to directly limit the capacity of racists to spread their hate, but of equal importance, they are in the position to inform the public debate. Their statements are part of the debate that shapes the values and priorities of today’s society. They help define what is cool. We need to tell the neo-Fascists they are never going to be “cool.” We need socially responsible companies to take a stand. Together we need to say “no” to the iFascists of today and tomorrow.

Dr. Andre Oboler is a social media expert and Director of the Community Internet Engagement Project. He holds a PhD in Computer Science from Lancaster University in the UK.