Assad gets the picture as satire comes to YouTube 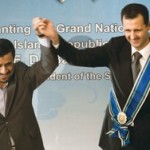 Source: By David E. Miller  / The Media Line,  Assad gets the picture as satire comes to YouTube, Jerusalem Post, September 6 2011

A cartoon Bashar Assad picks up the phone and dials to his friend Mahmoud Ahmadinejad, the president of Iran and Syria’s most important ally.

“The people are revolting against me, they don’t love me anymore,” a nervous Assad tells Ahmadinejad. “Don’t worry, crying won’t help. I have a solution – get on a plane and come here,” replies the Iranian. Taken to a cave in a black limousine in Iran, Assad meets growling Iranian Supreme Leader Ayatollah Khamenei, who advises him to surround the cities, suppress freedom, keep people off the streets and stop them from speaking.

“Terrorism in revolution is critical and lying is its basis,” the cross-legged ayatollah instructs him. He should know, as some 70 people were killed and 4,000 injured when the Iranian government put down election protests in 2009.

A happy Assad sees the light: “Yes, absolutely. Lie and lie until you believe your own lies,” he says.

The satirical cartoon uploaded to YouTube on August 6, “Oppressor of My Greatest Revolution” has already received 76,000 hits and counting. The three-minute clip is episode one of a new on-line serial called “The People’s Palace,” a reference to one of Assad’s residences.

Dissidents in Syria and elsewhere in the Arab Spring world are finding new and creative ways to poke fun at their leaders –and unlike their predecessors who were reliant on the printed media they face far fewer red lines because the content is sitting on a server far away from the despot’s reach.

Most observers acknowledge social media have played a critical role in bringing people onto the streets, but YouTube offers them an opportunity to become more creative and expansive in the way a 140-character Tweet cannot. As the Arab Spring marks its ninth month, that has become an increasing important element in the fight against oppressive governments.

“Facebook and Twitter are strongly linked to the Arab Spring, but YouTube has been a less significant social media platform,” Andre Oboler, an Australian social media expert, told The Media Line. “YouTube content requires significantly more time and effort to produce, which means it is less immediate, less fast paced, and there are fewer people able to do it.”

The risk of recognition in a video clip may have also deterred many Arab oppositionists from using the site, he says.

“Even in democratic states YouTube videos are used by police to identify suspects. We’ve seen this recently with the London protests,” he says. “In authoritarian regimes, the punishment may be far higher and the grounds for arrest far less reasonable.”

The danger of engaging in humorous criticism was amply illustrated when veteran Syrian cartoonist and outspoken Assad critic Ali Ferzat was badly beaten by unknown assailants on August 25, left bleeding on the side of a Damascus road. The anonymous assailants made sure to injure his hands, telling him it was “just a warning.”

Over 2,200 Syrians have reportedly been killed since unrest broke out in March, according to the United Nations.

WikiSham (Arabic for WikiSyria), the company that produced The People’s Palace, says it strives to create meaningful cartoons that mimic reality and criticize it in an intelligent and witty way.

“We don’t aspire to expand to Australia,” writes WikiSham. “Our target is the Arab viewer, attempting to positively draw attention and critique the living Arab reality.”

Another YouTube clip entitled “No Matter What” features a masked Syrian woman criticizing Lebanese Hizbullah leader Hassan Nasrallah for his support of the Assad regime. The video, uploaded on August 12, was already viewed more than 160,000 times. The clip displays snippets of Nasrallah speeches, with the masked Syrian woman commenting on them.

“Where are the Syrian people? We will stand with them!” boasts Nasrallah, and the woman replies: “Here we are! Masked! Why don’t you take a plane and come to Aleppo or Hama .… Go to the square … You’ll find a small minority of Syrians there, only about 500,000.”

Only last February did Syria lift a ban on Facebook and YouTube that had been in place since 2007. The brutal killing of 13-year-old Hamza Khatib by Syrian forces was uploaded to YouTube, helping to send some 50,000 Syrians to the streets in June. The website briefly removed the video for its graphic content, but then reinstated it for its “news value,” The Washington Post reported. Following the demonstrations, Syria shut down the Internet nationwide.

According to the Internet World Stats website which monitors internet exposure worldwide, 4.5 million Syrians, or 20% of the population, use the Internet when they can.

While data are unavailable for Syria, YouTube is the fifth most visited Internet site in neighboring Lebanon, behind Facebook, Google.com, Google.com.lb and Windows Live, according to Alexa Global Traffic Rank.

From the beginning of the Syrian revolution in March, YouTube has served as an exclusive platform for news clips of the violent military clampdown on protesters. Stations like the Sham News Network (SNN) have set up YouTube accounts whose videos have received a total of over 15 million hits.

Palestinian journalist and media expert Daoud Kuttab says Syrians turned to YouTube as a reliable alternative to state-run media. He says YouTube was used by Syrian oppositionists to organize rallies and demonstrations.

“All Arab and international TV stations are banned in Syria,” Kuttab told The Media Line. “But YouTube is available, it’s not censored.”

Kuttab says that younger Syrians are quickly learning the new technology and utilizing it to their advantage.

“It’s very democratic. Good videos get many hits, and bad ones aren’t viewed. People don’t need to go through the traditional gatekeepers any longer,” he says.

“Ultimately it is all about the content. Is this something you feel you really must share with others?” social media expert Oboler adds.  “If so, it might just go viral and the embedded message will be spread across the globe to millions of people.”