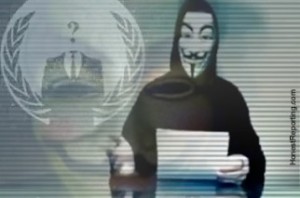 Since its earliest days the “Internet gathering” known as Anonymous has declared “we are legion”. After attacks on PayPal, Amazon, Sony, various banks and US Government websites, as in Roman times, the power of the legion is again feared. According tosome, anonymous’ latest target is Israel, with a threat to systematically removing Israel from the internet. The evidence, however, suggests this is far more likely an impersonation. Though only circumstantial, the evidence suggests the possibility of Iranian sponsorship. If so, this would mark the first effort by a state, or perhaps its proxies, to infiltrate and manipulate Anonymous into pursuing a government’s agenda. If that effort backfires, I for one wouldn’t want to be on the receiving end.

The allegations of an attack appear to emanate from a YouTube Video title“Anonymous Message to the State of Israel” released by TheAnonPress. In the video the computer generated voice declares “For too long we have tolerated your crimes against humanity and allowed your sins to go unpunished… You are unworthy to exist in your current form”. The anonymous voice goes on to speak of a “crusade against your reign of terror” which will start with a systematic removal of Israel from the Internet.

While the introduction clip to the video is indeed a work of art, the message shows a fundamental lack of understanding about Anonymous. The blind hate that drips from this video is far more reminiscent of a speech in the United Nations… by President Ahmadinejad. Indeed, the video declares “We will not allow you to attack a sovereign country based upon a campaign of lies”, a reference to Iran and its nuclear weapons program. The video was released in the lead up to the 33rd anniversary of the Islamic Revolution, where Ahmajinedad made an announcement of “big new” Iranian nuclear developments.

Indeed prior to the release of the video there was talk about Iran in the usual anonymous discussion spaces, but none about Israel. Most discussion continues to centre around internet freedom and the campaign against ACTA, a multinational treaty to strengthen copyright and intellectual property laws and the way they are applied to the internet. Also being discussed was the latest release of data from “Operation Blitzkrieg” an anonymous operation which has been targeting Neo-Nazi groups over the last seven months and recently led to the release of personal information, usernames and passwords of users on neo-Nazi websites. A 2011 video directed to neo-Nazis claimed they “took over a plague, known as anti-Semitism” and through intimidation and violence threaten the free speech. The militancy of “Operation Blitzkrieg” led to internal debate and criticism within Anonymous.

Despite media attention on hacktivism, Anonymous as a whole is more about initiating active civil disobedience than cyber attacks. Perhaps the best explanationwas given in 2010 following “Operation Payback” (in support of Wikileaks). “Anonymous is not a group of hackers. We are average Internet Citizens ourselves and our motivation is a collective sense of being fed up with all the minor and major injustices we witness every day.” The press release speaks about a motivation for symbolism and drawing attention to issues rather than the threat of a violent mob. It was the discipline of the legions that made them legendary.

The threat of an all out cyber attack on Israel resembles not the methods of Anonymous, but rather the threats of Hamas, an Iranian proxy. In mid January Hamas spokesman Sami Abu Zuhri told journalists, “Penetrating Israeli websites means opening a new field of resistance and the beginning of an electronic war against Israeli occupation”. The current video claiming Anonymous is targeting Israel is not supported by discussion within the anonymous collective. More damaging still, is that the video was not originally posted by TheAnonPress. Their copy (9th of February) was a repost of a copy posted earlier that day by the account “AnonSolutions”. TheAnonSolutions copy linked to TheAnonPress Facebook, a clear invitation for TheAnonPress to repost and claim the credit. The previous attempt by “AnonSolutions” to put the video into circulation, on February 4th the same day the AnonSolutions account was registered on YouTube, was a dismal failure attracting almost zero traffic.

The re-release by AnonSolutions was accompanied by efforts to spread the video on various websites and Facebook groups… while missing most of the key communications hubs of those associated with anonymous. This botched release suggested the poster was not familiar with anonymous. Throw away accounts have been used in a similar way on Wikipedia by NGOs staff trying to manipulate their own pages, presumably after being asked to do so by management. There is an obvious difference between a member of an online community and an interloper. This video comes from an interloper.

This was not the first anti-Israel video claiming to be from anonymous. There were two others incident periods last year. The more recent was in November. The videos released last year bear a strikingly similar in style, message and production to this latest video. They may even have been a trial run. If so, the repeated use of different throw aware accounts over an extended period suggests organisational backing and indicated the timing of the release may have indeed been deliberately planned.

This brings us back to the contents of the video itself. It includes a long list of antisemitic tropes, from control of the media (“the propaganda that you circulate through the main stream media”) and of world governments (“and lobby through the political establishment”), to accusations of “Zionist bigotry” and inherent cruelty (“you laugh while planning your next attack”). Perhaps most telling is the claim that “so long as your regime exists, peace shall be hindered”, a call for the destruction of the State of Israel which is later repeated (“You are unworthy to exist in your current form”). The video includes a version of the Livingstone Formulation, claiming the State of Israel “label[s] all who refuse to comply with your superstitious demands as Anti-Semitic, and have taken steps to ensure a nuclear holocaust.” The claim seeks to shield criticism of Iran’s genocidal nuclear aims from criticism of being antisemitism, while trying to inverse the charge and point it at Israel.

This effort to subvert Anonymous to Iran’s cause may be the work of an individual anti-Israel activism or Iran’s proxy Hamas, however, the timing, linguistics, method of release and method of promotion are all a little too consistent with Iranian interests. The mix of skill in personating previous Anonymous videos, coupled with the lack of understanding about Anonymous and the online ecosystem, not to mention the persistence, all add credence to the state sponsorship theory. Of course it is anonymous itself that is best placed to trace this back to its source.

Efforts have been made to turn Anonymous against Israel before, but they tend to be rejected fairly swiftly in any discussion. Those who oppose internet regulation, who believe in civil disobedience and value debate, are likely to find much they agree with in Israel’s hyper democracy. They are likely to respect her for maintaining those values despite the pressures of war, terrorism, and threats of genocide. Anonymous has no quarrel with Israel, to argue otherwise is to ignore the values that bring members of Anonymous together, or to admit ignorance of the State of Israel, a young country built on the values of innovation, cooperation and freedom.

Dr Andre Oboler holds a PhD in Computer Science from the UK and completed a postdoctoral fellowship in political science in Israel. He can be contacted atfeedback@oboler.com or via twitter @oboler.