Meet Gilad 2.0 was a campaign I created and managed as Director of the Community Internet Engagement Project. The campaign ran for 4 months in 2011 and provided a platform for participation by 34 partner organizations from around the world. The campaign was presented in Melbourne, Sydney, Washington DC, New York, San Francisco, and Jerusalem.

The campaign involved the development of custom software that integrated with wordpress and a Google API to provide article and map support.

The front page of the new Meet Gilad site was designed to introduce Gilad Shalit’s story to the public. It was design to be displayed on an iPad, and many messages were collected around the world by people running the application on their IPad at verious events. 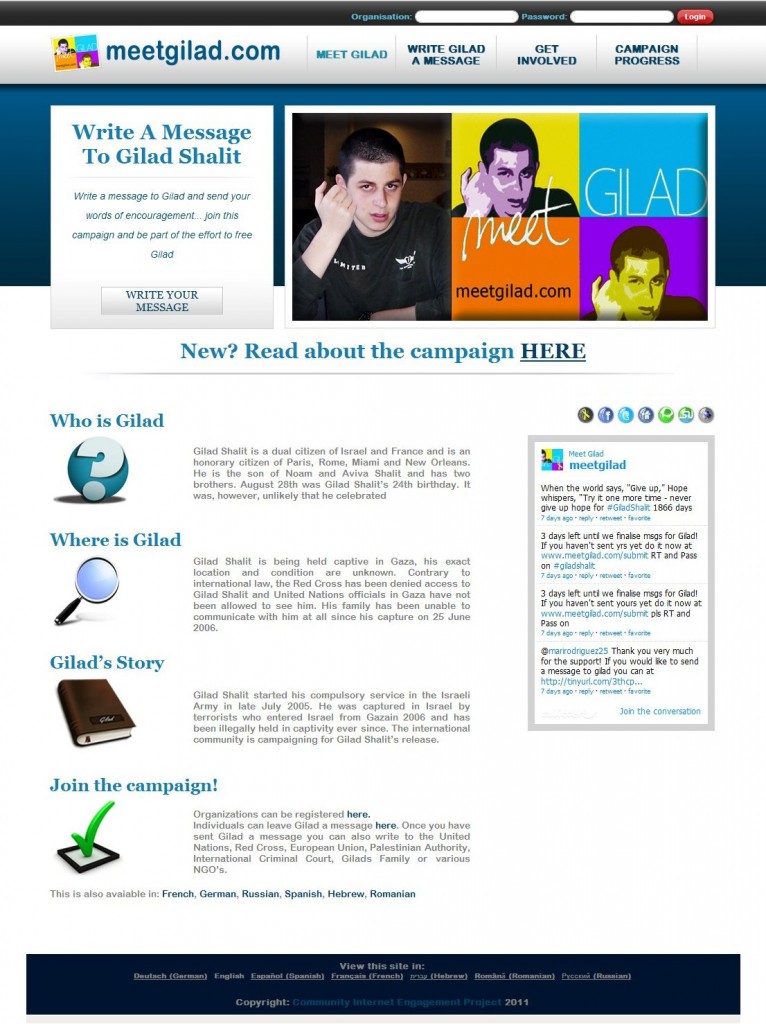 The key action people were asked to take was to write a message to Gilad. We knew this would leave many people stuck for words, and that it would lower the conversion rate. At the same time, the aim of the campaign was to raise awareness and make people think about Gilad, not simply to collect signatures. We decided the increased attention at the personal level was more worthwhile than a larger number of pro forma messages. 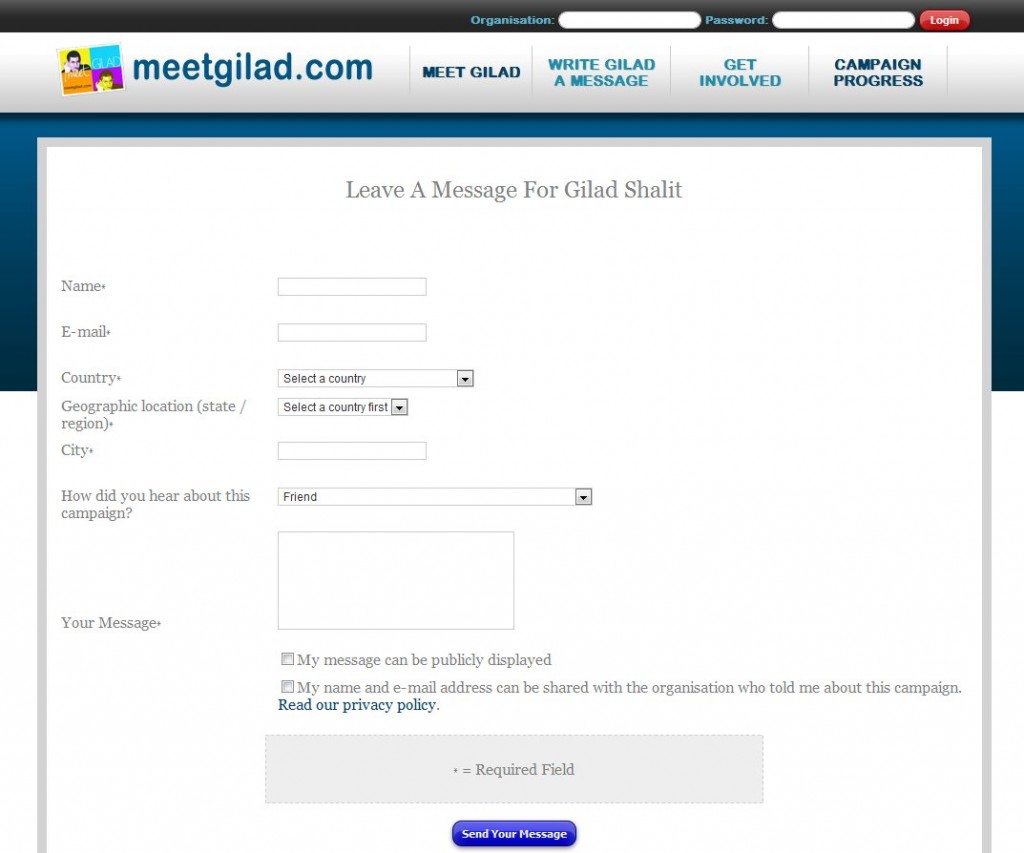 Once people had left a message for Gilad, we then gave them the opportunity to write to other parties. These ranged from Gilad’s parents through to the UN and international human rights organisations. 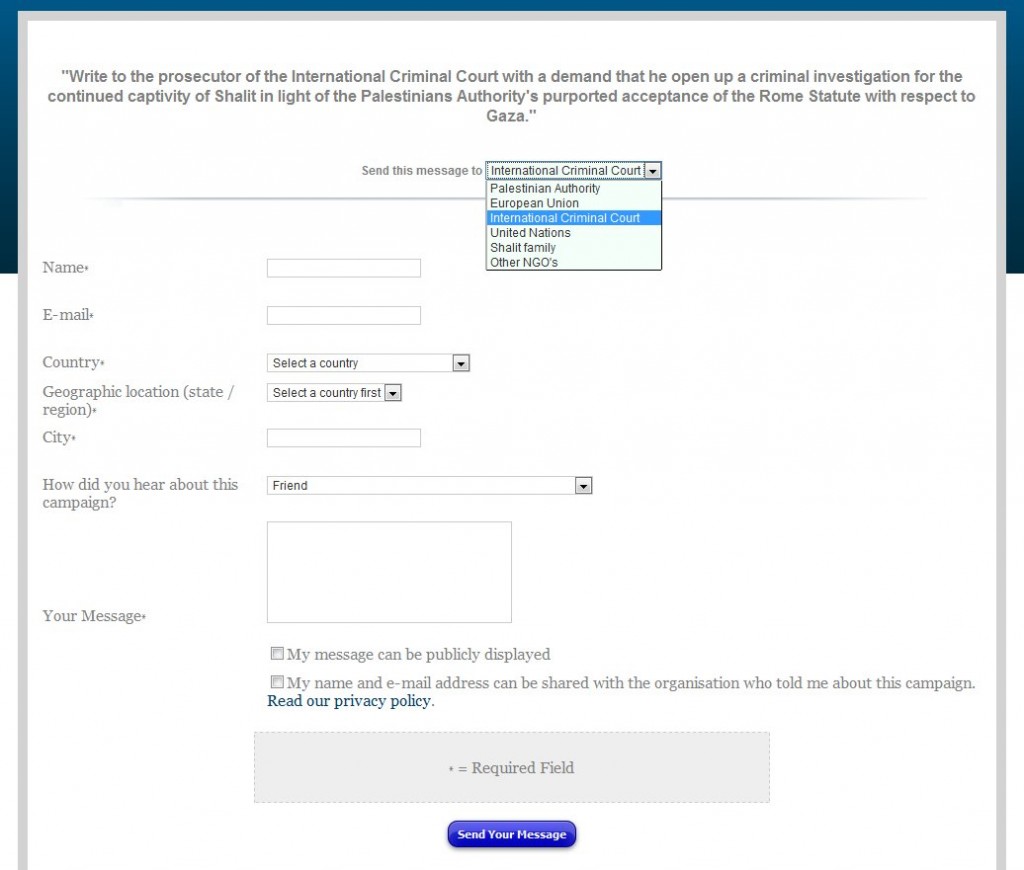 The campaign allowed direct participation, but it also allowed participation through a participating organization. Organisations registered and in return had a profile on the site. These were listed so visitors could browse through them. 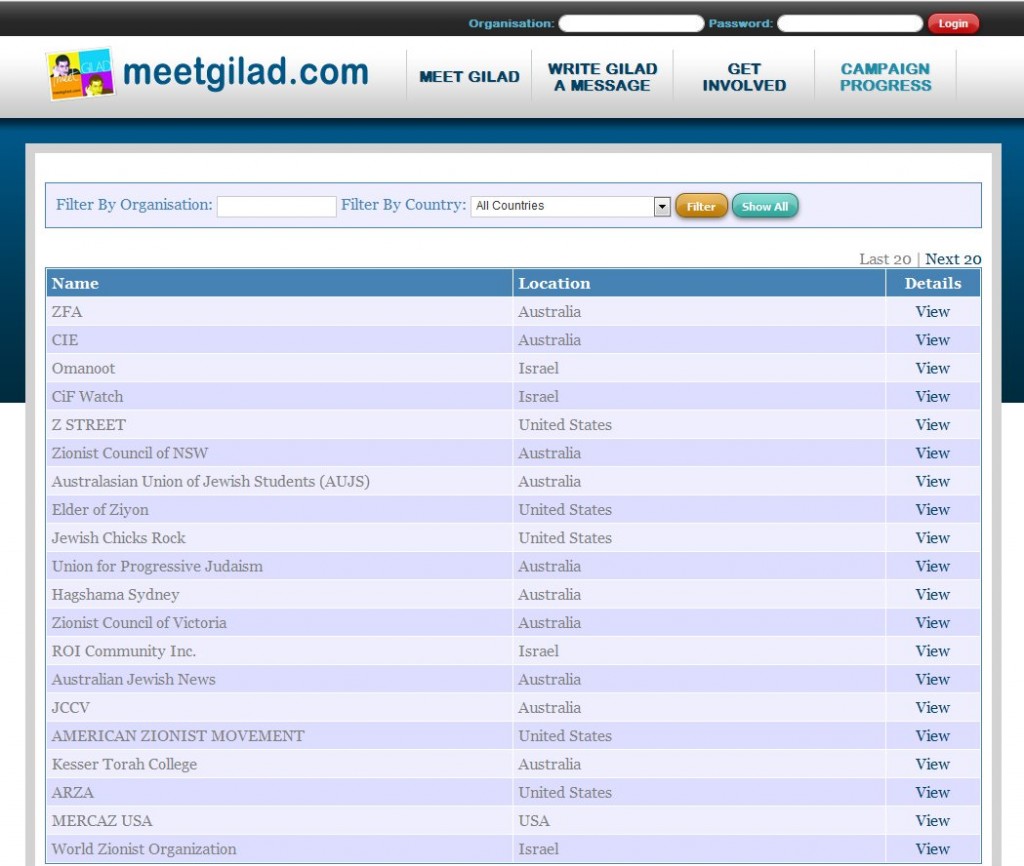 Each organisation has a profile which contained information about them, articles on their activity for Gilad, and a referral link that they could share with their members.

The referral link let the system know a visitor was brought to the campaign via that specific organisation. Visitors who did not use a link still had the option of selecting which organization told them about the campaign while leaving their message.

Organisations set targets for the number of messages they wanted to collect, and these targets and the progress towards them were displayed on their profile page.  This divided the work of running the campaign between many organisations and devolved activism to the local level while still aggregating the result. 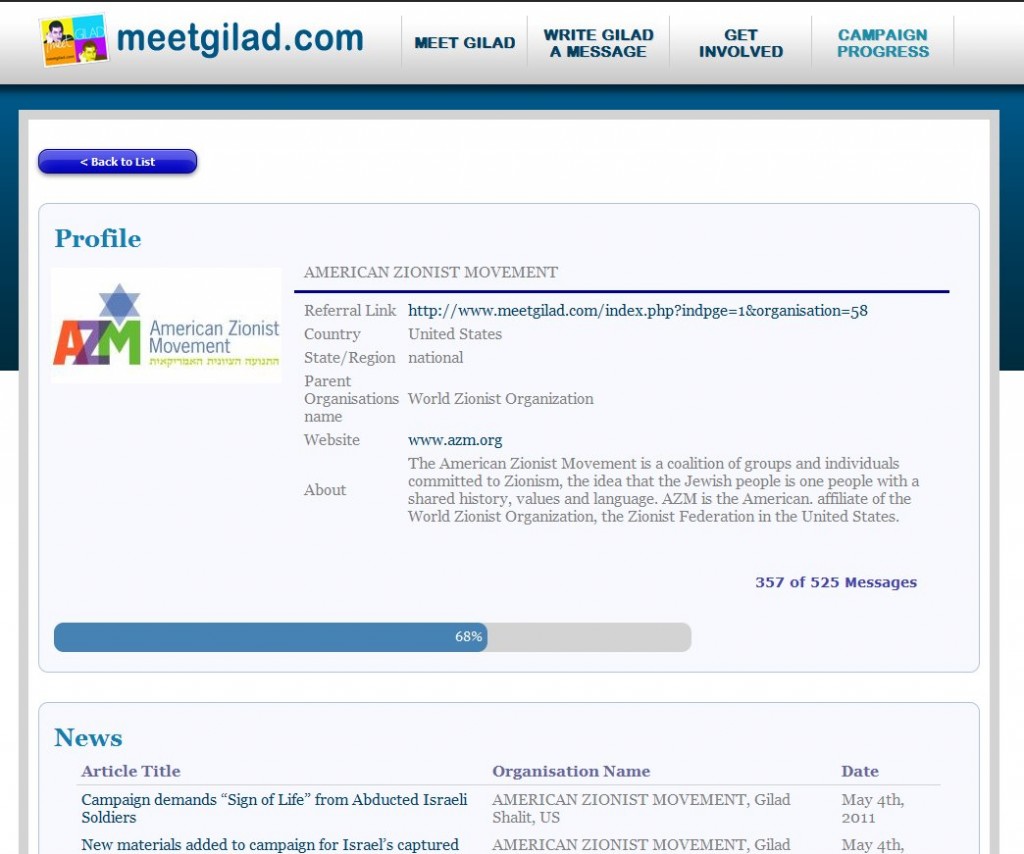 To facilitate localisation of campaigning further, local branches of organisations were able to nominate a parent organisation, and their activity would count both for themselves and for their parent. This removed a common conflict between the role of local and national bodies in campaigning. When organizations logged in, they could see their total activity, a breakdown between themselves and their local branches (including individual registered activists), as well as messages that their supporters had left. 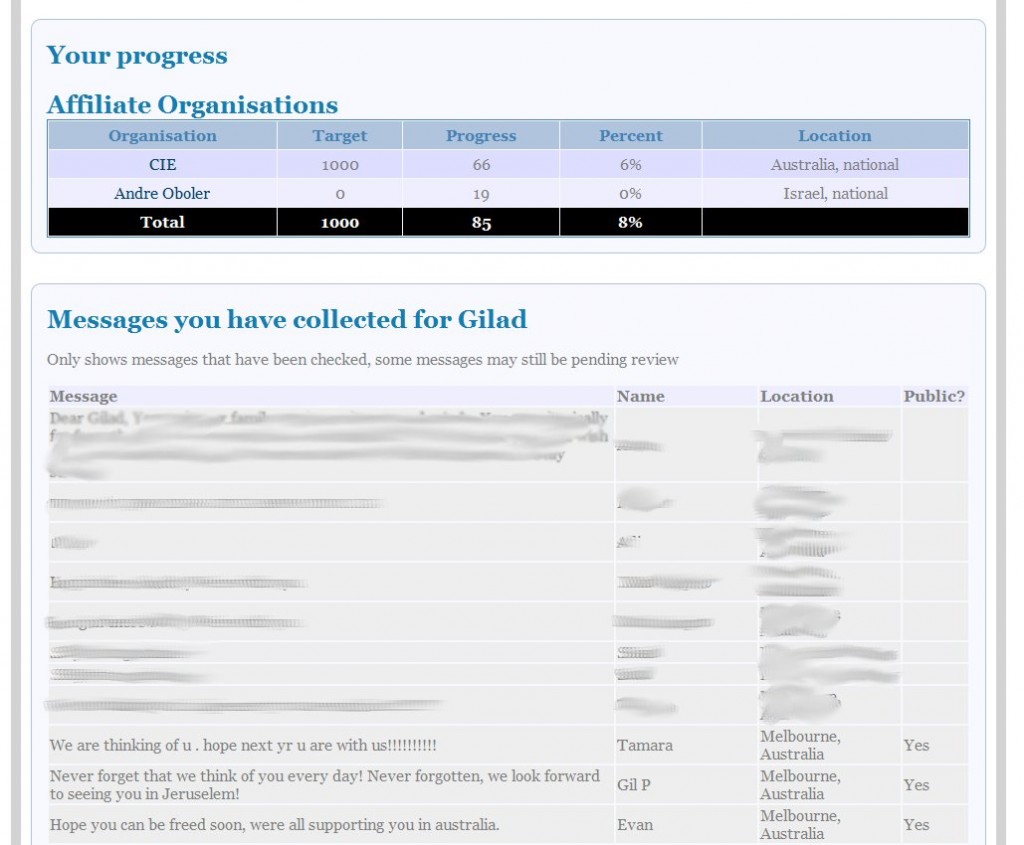 The site also contained instructions on how organisations and individuals could become active supporters of the campaign through various sort of online (and real world) activity. 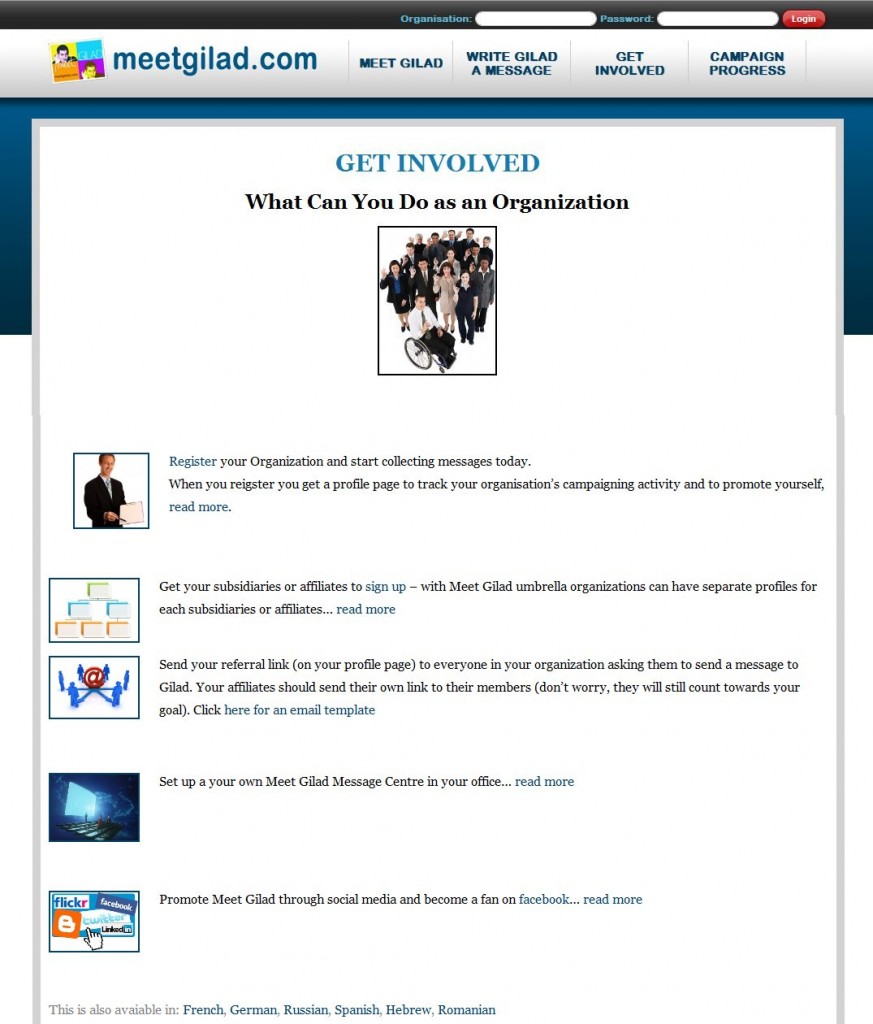 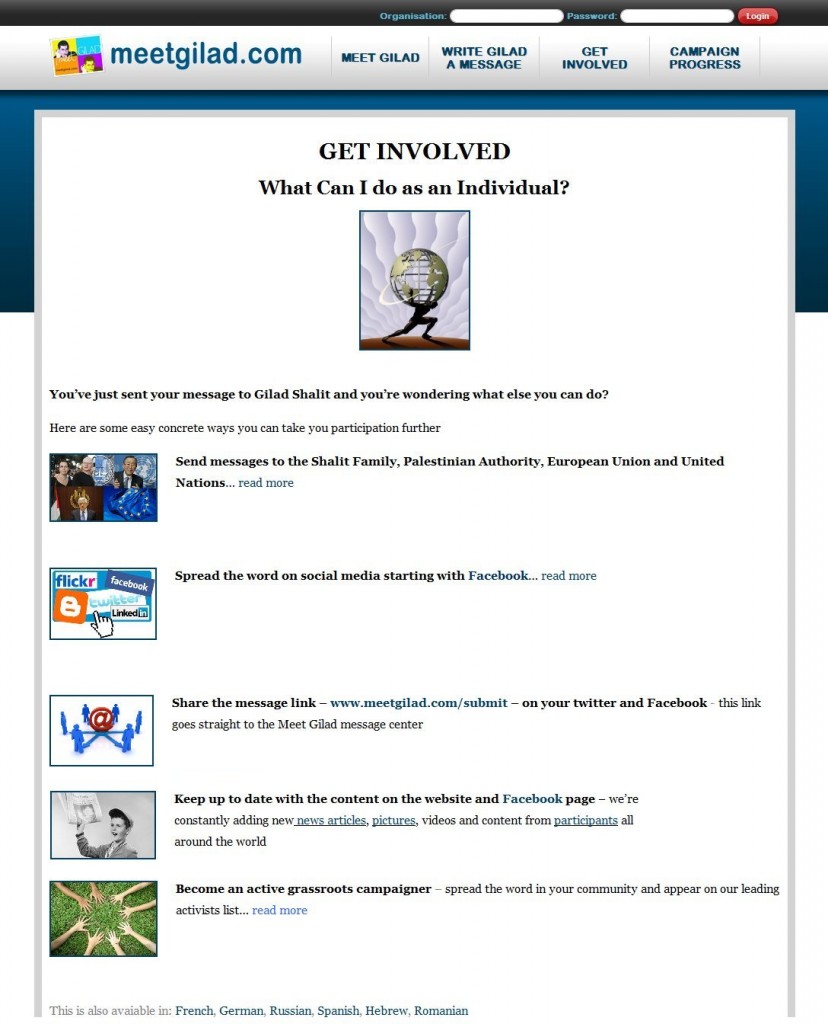 The site also contained updates on news related to Gilad Shalit and to the campaign for his release. 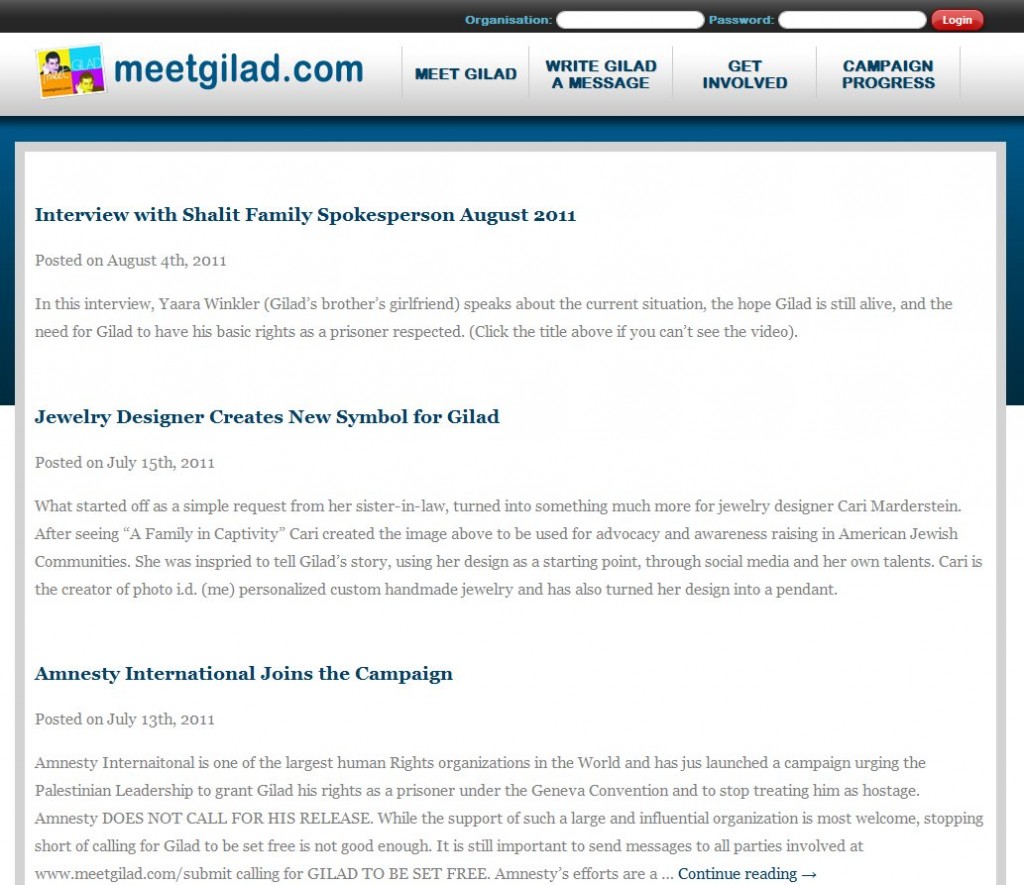 Finally, progress was shown on interactive maps that gave a breakdown of the activity by country and region (States in the US and Australia, major cities in other parts of the world). 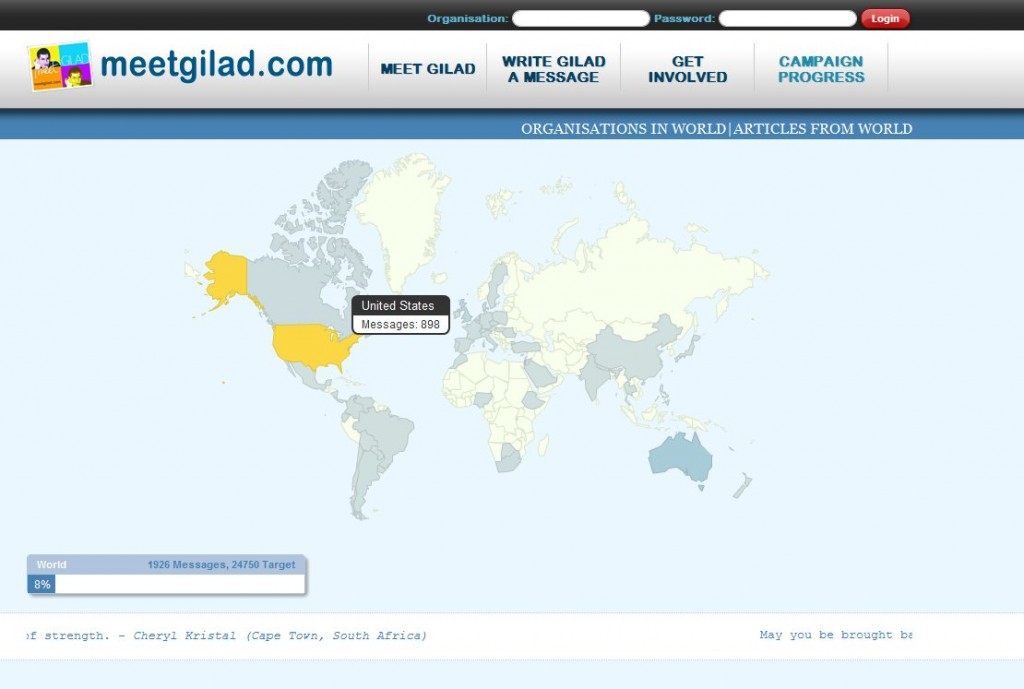 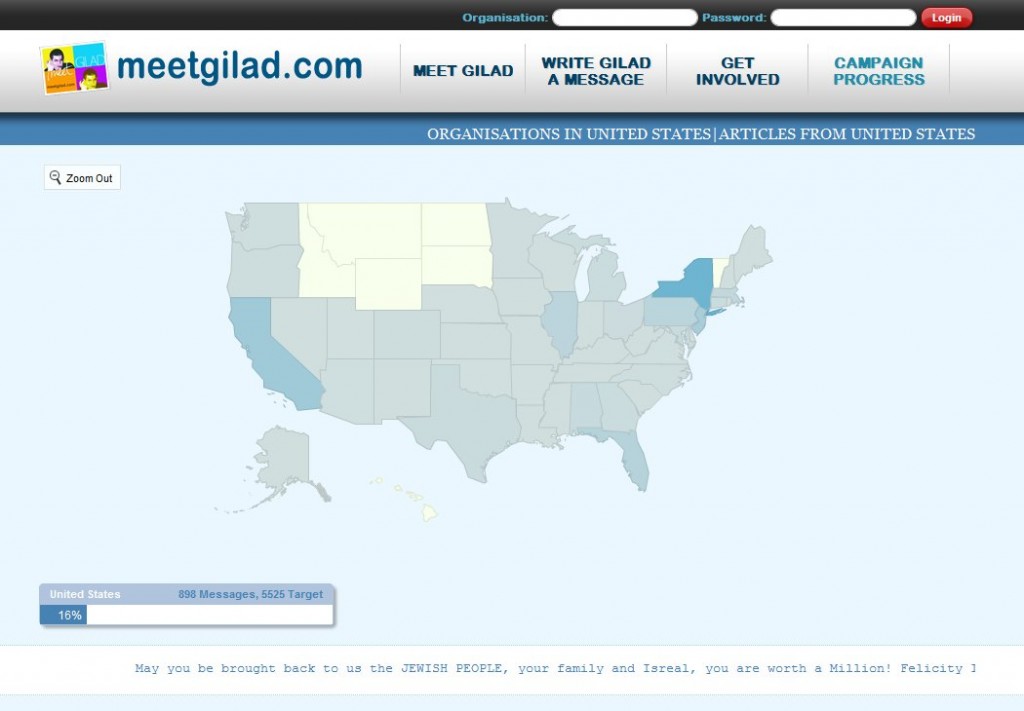 At the end of the campaign a book of 169 pages with 2000 individual messages was created for Gilad. The messages were divided by country, from Argentina to Venezuela.

Equally impressive is the number of organizations that were able to come together as part of this campaign: 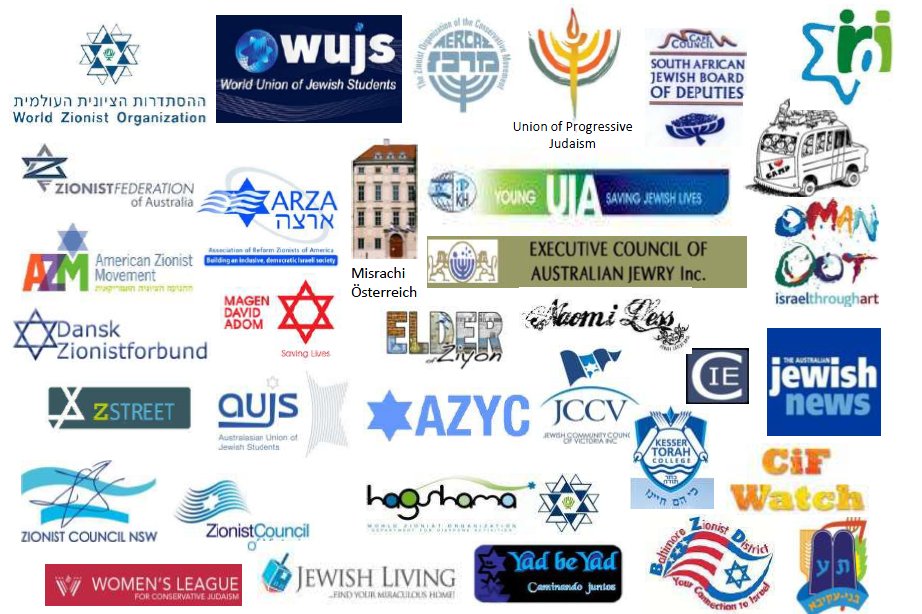 The Meet Gilad 2.0 campaign is a model for global online activism.