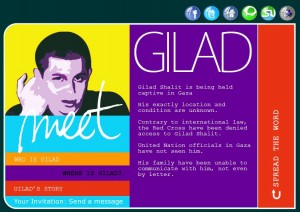 MeetGilad.com was launched in the lead up to Gilad Shalit’s 24th birthday. The campaign was supported by postcards given out in major cities in Australia as well as global online advertising.

The site introduced people to Gilad Shalit and his plight and directed them to take action by leaving a message for Gilad. These messages were later delivered to the UN Secretary General with a request that he get them to Gilad Shalit, given that Gilad has been denied communication without the outside world, including Red Cross access, in violation of international law.

The campaign collected over 2000 personal messages to Gilad and was viewed by thousands more people around the globe during a two week campaign run. Copied of the messages were also prepared for Gilad’s parents in the hope they will soon be able to give them to Gilad, once he is freed, even if the UN continues to fails him in the mean time.