The Australian Jewish News (Sydney Edition) reports on the completion of the first stage of Andre Oboler’s new project to combat online hate.  The solution was presented at an experts meeting of the Online Antisemitism Working Group of the Global Forum to Combat Antisemitism which took place in Israeli Foreign Ministry in Jerusalem in early July 2011. Following this meeting it was presented at B’nei B’rith events in Sydney and Melbourne. A report containing detailed information on the project was also created. 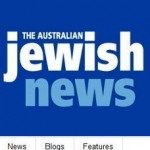 Plans for Australian-designed software, which seeks to identify and disect online antisemitism, have been unveiled.

The system called Fight Against Hate is the brainchild of social media expert Andre Oboler, and forms one component of the Community Internet Engagement (CIE) project launched in Melbourne in January.

According to Oboler, its aim is to produce empirical data about the colume of online hate, focusing specifically on social-media platforms such as Facebook and YouTube.

Its features include allowing the public to report content to a third party, separating data from questionable content, and producing trend reports on processed data. Over the past few weeks, Oboler has criss-crossed the globe to present the first-stage design of the softwarer — first at the Global Forum to Combat Antisemitism in Israel and last weekend at B’nei B’rith events in Sydney and Melbourne.

“The response has been very positive,” Oboler told The AJN this week.

“The consensus is that this is something new and very much needed. And from the experts dealing with online hate, the view is that this is a tool that would allow them to do [much] deeper analysis, which they can’t really do at the moment. So far all we have is samples, not empirical data.

“The aim is to try and clean up social media,” Oboler said. “If we do that, we can start changing social values so that hate is again seen as not acceptable in society.”

Now all that is needed is the fundign to build it.

Oboler is trying to raise $230,000 to get it off the ground, with another $200,000 a year to cover operating costs. This is in addition to the CIE core operating budget.

“As soon as we have the funding we can start,” he said.

“What we hope is that the major donors in the Australian Jewish community are willing to step forward collectively so this solution can remain a primarily Australian initiative, covering not only antisemitism, but online hate in general. As a multicultural and innovative society, we believe it fitting that Australia is seen to take the lead in this arena.” 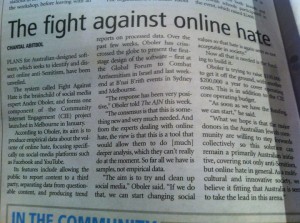