The online campaign to recognise Palestine 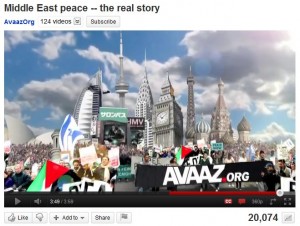 Pirkei Avot records Ben Zoma’s advice that a wise person is one who learns from all others. Online advocacy is a rapidly evolving field and one in which Israel advocates are regularly out maneuvered. We must learn not only from actions on our side, but also from the campaigns of those opposing us. Following my last article, which discussed two campaigns in support of Gilad Shalit, this article looks at a campaign in support of a Palestinian State.

There is a strong argument in favour of ignoring those campaigns with which we disagree. This avoids giving them oxygen and a false sense of importance. The strategy is used in the real world to limit publicity through the media, and also in the online world to limit counter-productive promotion of a site to both people and search engine spiders (software used by search engines to explore and rank websites). One important limitation on such a strategy is that it becomes ineffective once the problematic campaign gains enough attention of its own.

There is also a need to expose campaigns which may not be all they seem. This is particularly true in the conventional media when Israel and her supporters are up against Pallywood, the production of fictional events and atrocities as part of Palestinian public diplomacy. Another approach is the manufacture of fake “grassroots” campaigns, what is known as astroturfing. A 2009 collection of astroturf campaigns shows the technique in action in the real world.

The success of an online campaign is usually measured by participation and grassroots buy-in, fake this and you have faked the whole campaign. In the online world astroturfing has now reached dangerous levels, and much of it is said to be done by professional lobbying organisations – and by governments.

Both campaigns with real support and Astroturf should be discussed and countered. I leave it to the reader to decide which category Avaaz’s “Recognise Palestine” falls under. The only judgement I make is that we can learn a lot about online advocacy from this campaign.

A Google search for “recognize Palestine” presents the Avaaz campaign as the second search result. This is a strong start for an advocacy campaign and is typically achieved through many inbound links from other websites. Palestinian advocacy is typically much better than pro-Israel advocacy in the search engine rankings because culturally pro-Palestinian / anti-Israel campaigns have an attitude of share and share alike, while pro-Israel advocacy sees each organisation going it alone and seeking to promote itself even more than the cause. The politics of funding for Jewish / pro-Israel advocacy is greatly tied up with this problem.  The exception is unbranded campaigns which can be supported by multiple organisations, both the campaigns discussed in my last article (Tweet4Shalit.com and MeetGilad.com) fall into this category and both are on page one of their respective search results.

The “recognize Palestine” campaign claims to have been seen by nine hundred thousand people and have collected four thousand signatures less than it has page views. If true that is both an amazing conversion rate and a staggering number of views for a page that was launched sometime between August 5th and August 17th. The campaign aims to collect a million signatures, and it appears to be quite close to completion. In fact, the numbers appear to be at a tipping point where the actions of each visitor could make a real difference to completing the goal. Through luck or design this helps the campaign.

The power of video

The central feature of the “recognize Palestine” campaign page is a video. Videos are of increasing significance and any site not making full use of them is behind the times. Avaaz uses them sparingly and other campaigns on the site, such as the famine in Somalia and the threat to the Amazon have not had the same investment evidenced in the “recognize Palestine” campaign.

The video gives a clear message, it demands that now is the time for Palestinians to also have a state of their own. The video makes this demand using symbolism and animation with imagery designed to give maximum emotional impact to Palestinian claims while presenting “Israel’s claims” in a factual, abstract and non-urgent manner. The presentation of both sides is important to a sophisticated audience. Israel’s case is, however, minimized not through lies but through unequal emotion impact, missing information and logical fallacies. Non sequiturs, conclusions that do not logically follow from the arguments leading up to them, are common.

To give some examples, the video says, “wars were fought with the new country Israel, and Israel won taking Palestinian land. There hasn’t been peace since. Now a million and a half Palestinians live in Gaza.” To discuss the situation in Gaza with no mention of Israel’s unilateral withdrawal is dishonest. This is presumably done because the Gaza withdrawal provides the strongest case against unilateralism by either side, as well as explaining Israel’s legitimate fear of what may result from Palestinian statehood without peace. At another point the video explains, “Million’s of Jews were murdered during the Holocaust, pushing them to fight harder for a safe homeland, and after decades of suffering under Israeli control, Palestinians are desperate for freedom and an independent state.” That’s a great use of the ‘non sequitur’.

Avaaz is known for its professionally produced videos; a joint project with Agit-Pop Communications won the 2007 YouTube Award in the politics category. The campaign uses video well and nothing on the pro-Israel side is as slick.

The campaign does have one serious drawback, and this the numbers… they simply don’t add up. When I look a few days ago the page said it had been visited 609,437 times and the petition had been signed 868,279 times. If the petition was first released through this page those numbers are actually impossible. One logical explanation is that this same petition was originally on another page. Indeed it was, but back then it was directed to specific members of the security council. That campaign was a dismal failure, so Avaaz moved the goal posts and recycled the petition and signatures, now addressing it to all UN members. The current page does not disclose this reuse. Honesty is a critical component in any grassroots campaign, without it the grassroots can quickly turn on you.

Even given this initial boost to the petition, the numbers still don’t add up. The video is hosted on YouTube, which maintains its own stats. Given the video runs automatically when the page loads, the increase in page views should be matched by an increase in YouTube’s own count of video views. One qualification is that YouTube only counts unique views. The page, by contrast, may increase its viewer count each time it is loaded, leading to a much higher count as one person may reload the page many times. If this is the case, YouTube’s count is a more meaningful measure. The popular myth that auto playing videos do not count is apparently just that… a myth. Even so, over a five day period, 296,232 new page views appear to have only resulted in 30,828 additional signatures and 4,601 additional video views.

While there may be a logical explanation for the varying numerical data the site displays, the bottom line is that the numbers don’t add up. The conversion rate is rapidly dropping. This is not a rapidly growing viral campaign but rather a major investment that has fizzled.

Avaaz has a 4.7 million dollar budget and has (indirectly) received funding from George Soros. It has money and uses it to do a professional job without cutting corners. Even the choice of excluding user comments is deliberate; a quick look at the comments on the YouTube video shows that when the public has the ability to speak, a propaganda video like this will not go unchallenged.

Those defending Israel lack a well resourced professional online campaigning organisation. Our efforts, including my own Community Internet Engagement Project, have simply not been anywhere near this scale. As a community we have professional political lobbying organisations, use pollsters, and conduct message testing, but when it comes to online advocacy, we are clearly far behind.

To succeed we need to learn from others and recognise that online advocacy, like political advocacy, is something that requires purpose built organisations with significant financial investment. This is not something that can be left to volunteers or added to the work of organisations with specialities in other areas. The cost is high, and the need critical, we need to band together or be left behind.

Dr Andre Oboler is social media expert. He holds a PhD in Computer Science from the UK and completed a postdoctoral fellowship in political science in Israel. He can be contacted at feedback@oboler.com or via twitter @oboler.