The “Djokovic Scandal” over a sweaty shirt shows both the best and the worst of social media. The Facebook page “Yael Vi vat Rothschild- GIVE BACK the Shirt to Mellisa COOK” was a valiant effort at grassroots activism. I say this not because I support the cause, but because the page administrator, having accidentally created a space of hate, took responsibility to clean it up. That’s the sort of responsible use of social media we seldom see.

What started as a public protest in support of Mellisa Cook led to unlawful racial vilification of Yael Rothschild. The posting of her address and phone number led to additional “real world” threats and abuse. Online threats can be just as damaging as offline threats, the volume of suicides and self-harm incidents resulting from online abuse, including online racism, make this plain. With so much of our lives are online, the old claim “it’s only the internet” rings rather hollow.

The poster of racist comments is primarily responsible for them. In Victoria, the Racial and Religious Tolerance Act 2001 makes it unlawful to incite hatred, serious contempt, revulsion or severe ridicule of a person on account of their race. Recent research by Telstra also shows poster of racism may harm their job prospects; 28% of employers check job applicants’ Social Media profiles and 37% are put off by discriminatory comments. Some, like the poster who wrote “Where the f**k is Hitler when you need him!!!” on the page, are now using fake accounts to avoid the backlash from society.

Page administrators, whose identity is kept secret and who are given moderation powers, also bear some responsibility. In this case the administrator deserves praise.

“Yael should have never been personally harassed like she was”, they declared on the page. They used their privileges to moderate comments and warned fans that they “will NOT accept people making fun of someone’s religion, heritage or beliefs” on threat of expulsion.

Last year, on behalf of the Global Forum to Combat Antisemitism, I sent Facebook a white paper about administrators’ responsibilities. This incident shows that such a system can provide an effective response.

Dr Andre Oboler is co-chair of the Online Antisemitism Working Group of the Global Forum to Combat Antisemitism. 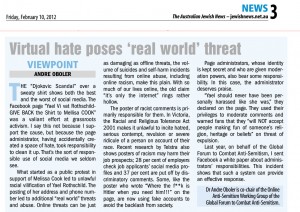