Facebook Antisemitism 2.0: The “Israel is not a Country” Group

The group was the primary example of Antisemitism 2.0 in Dr Oboler’s seminal report: Andre Oboler, Online Antisemitism 2.0. “Social Antisemitism on the Social Web”, Post-Holocaust and Antisemitism Series, JCPA, (April 2008, No. 67). Advanced copies were released at the 2008 Global Forum.

A later article by Dr Oboler discussed the group and the response to it, inclduing direct action by the JIDF,  in more depth: Andre Oboler, The rise and fall of a Facebook hate group,  First Monday, Volume 13, Number 11 – 3 November 2008

An updated version of the First Monday article, noting Facebook’s ultimate action in closing the group and the role Wikipedia seemed to play in this decision, was published in the report: Andre Oboler, The Rise and Fall of a Facebook Hate Group, Covenant – Global Jewish Magazine, Volume 3, Issue 1 (August 2009), Interdisciplinary Center (IDC) Herzliya.

The “not a country” Facebook Group is the classical example of Antisemitism 2.0. The features identified by reference to this group have since been found in many other attempts to use social media to spread both racism and the acceptability of racism.

In Antisemitism 2.0 the danger comes as much from the creation of a tolerance to casual racism, reducing the willingness of people to speak up in the face of racism, as it does from the increased spread of racism itself.

This campaign also demonstrated the power of bad publicity in encouraging companies to take action. Particularly bad publicity in new media. The role Wikipedia played in publicly debating the issue and agreeing on the facts was significant, as was the role of grass roots activism by the JIDF.

In 2010 some people wrongly claimed the group was still active, they were confused by a new group with a similar but not identical name. Dr Oboler was asked by Wikipedia Co-Founder Jimmy Wales for clarification, and demonstrated the difference. The efforts to rewrite the article in Wikipedia, replacing documented facts with incorrect information with no sources, highlights the volatility of Wikipedia. In a charged situation with lots of attention and debate it was an asset, years later when there is less attention, it can become a tool of propagandists to spread hate. 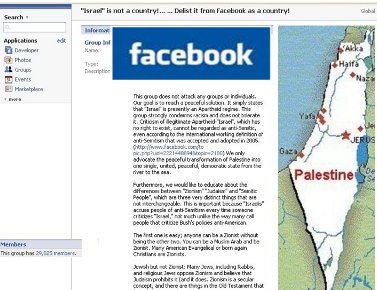 Campaigns
Antisemitism 2.0, Facebook, israel is not a country, Wikipedia